Pashinyan to Lavrov: The key issue for Armenia today is the situation  in Nagorno-Karabakh 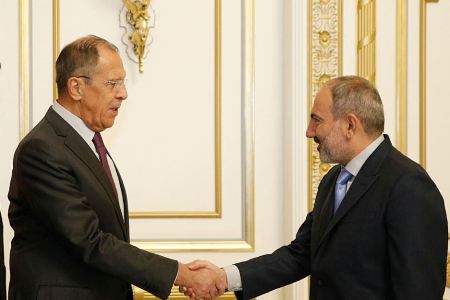 ArmInfo. . The key issue for  Armenia today is the situation in Nagorno-Karabakh. Armenian Prime  Minister Nikol Pashinyan stated this on November 21 in Yerevan at a  meeting with Russian Foreign Minister Sergey Lavrov.

As reported by the press service of the RA government, in this  regard, Pashinyan stated the need to make decisions on many issues.  "And the most important thing is the humanitarian side of the issue,  we must ensure the return of the Artsakh people to their homes, and  of course, there is already a fairly good dynamic on this issue. In  fact, Russian peacekeepers are in all places of retreat, they already  provide security. This is a very important factor that ensures  security of the people of Nagorno-Karabakh. But there are issues that  have not been resolved, they remain open: how will we ensure the  implementation of the right to return of residents of several regions  in the future, who will ensure the safety of our compatriots, how  will this be implemented? These, of course, are issues on our agenda.  We must discuss and make decisions in this regard, "the Armenian  prime minister said.

In turn, Lavrov stated that the delegation headed by him arrived in  Yerevan following the agreements reached by the Armenian side with  the top leadership of Russia and with the aim of discussing the  entire spectrum of Armenian-Russian cooperation, allied and strategic  relations.

"And, of course, issues related to the need to resolve the problems  around Nagorno-Karabakh are at the fore. The statement of November 9  makes it possible to resolve these issues on the basis of the  agreements reached in the document signed by the three leaders. First  of all, this concerns the return of refugees and solving all  humanitarian issues in the current situation.

We are committed to this, as you said. We are grateful for your  appreciation of the role played by our peacekeepers, which is  important not only in terms of ensuring security as a key component  of their mandate, but also in terms of continued support for those  returning and in need of humanitarian assistance.

And in addition to the peacekeeping role, the interdepartmental  center, which is being created by order of President Putin, is  already starting its work, and will also deal with all these issues  specifically. As I have already presented to you, we actively involve  international organizations of the UN system, we urge them to use  their capabilities more actively and proactively to help the  inhabitants of this region. We actively support the International  Committee of the Red Cross, which works, including in Karabakh,  "Lavrov said.  At the same time, the Russian minister added that  during the visit, the entire range of bilateral relations will be  considered, including along the profile lines of Russian Deputy Prime  Ministers, ministers of health and emergency situations. "You have  already met with the Minister of Defense of the Russian Federation,  the Director General of Russian Railways is also in Yerevan. I am  convinced that as a result of these sectoral negotiations we will  have a positive, comprehensive picture that will contribute to the  development of our relations and which, we sincerely want this , will  support your initiatives aimed at stabilizing the situation in  Armenia and resolving issues related to Nagorno-Karabakh, " Lavrov  said.

The interlocutors discussed a wide range of issues related to the  situation in Nagorno-Karabakh, as well as the agenda of the  Armenian-Russian cooperation.