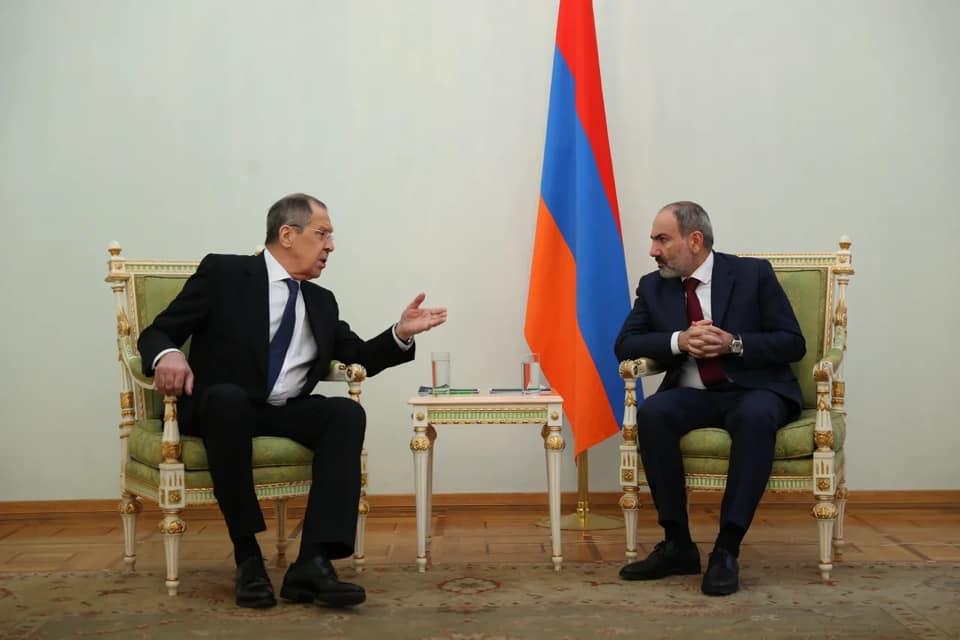 Asthe press service of the RA PM reports, greeting the guests, Prime  Minister Pashinyan said. "Dear Sergey Victorovich, dear colleagues,  welcome to Yerevan. I would like to emphasize that we highly  appreciate your visit to our country. It is crucial for us not only  to continue cooperating, but also to strengthen our ties, taking into  account the specificity of the current situation. We must tackle the  situation established in our country and the region, in general.

I wish to thank our Russian partners for the support provided not  only during the military crisis, but also during the pandemic. We  have all felt the support of the Russian Federation during this  period, especially over the past few months, as well as the friendly  and allied relations that have traditionally existed between our  countries.

We have quite a hectic agenda of discussions. I do believe that we  will come to address a lot of issues not only of current, but also of  strategic importance, because the regional military-political  situation has changed. I think we need to rethink our visions in the  context of near and strategic future. In this regard, we have common  views, programs, and we need to clarify them during today's talks.  Thank you."

Sergey Lavrov stated in turn, "Dear Nikol Vovayevich, dear  colleagues, first of all I would like to convey to you warm greetings  and best wishes on behalf of President Putin, Prime Minister  Mishustin. We are here in compliance with a decision made by Vladimir  Vladimirovich, you have discussed with him the agenda of today's  meetings. In turn, he talked about it with Prime Minister Mishustin.

Dear Nikol Vovayevich, as you mentioned, we are all interested in  reconsidering the whole complex of our relationships following the  November 9 statement issued by the leaders of Armenia, Azerbaijan and  Russia, which put an end to the bloodshed and stabilized the  situation in all its contexts, including the humanitarian aspect.

You know that the Russian peacekeepers are actively working to  implement the agreements specified in the aforementioned statement,  including the provision of humanitarian assistance.  Today we will  discuss issues related to the establishment of an interdepartmental  humanitarian response center. It is a new structure that will work  fully to meet the needs of citizens and the restoration of civic  infrastructure. We will also consider topical issues of economic  cooperation, cooperation in the energy sector, according to the  program prepared by our Armenian partners.

I would like to emphasize that we are actively working with  international organizations, UN agencies, such as the Office of the  Commissioner for Refugees, the UN Children's Fund, UNESCO and the  International Committee of the Red Cross.

We have contacted all these organizations and their leaders, and  today we are ready to exchange ideas on how to optimally organize  their contribution to the issues that need to be considered and  resolved today. We are grateful for the traditional warm welcome in  Yerevan and reaffirm our support for the fraternal Armenian people.  My colleagues will present our approaches to economic, energy and  humanitarian cooperation, including the joint efforts to combat  COVID-19."

Issues related to the development and deepening of Armenian-Russian  bilateral cooperation in a broad range of areas, including energy,  transport infrastructure, COVID-19 response action were discussed  during the meeting.

Reference was made to direct humanitarian assistance provided to  Nagorno-Karabakh, as well as to the exchange of bodies and prisoners  of war and the preservation of the Armenian cultural heritage in  Artsakh.  The importance of their consistency was emphasized.

Coming to Turkey's role in enforcing the ceasefire in the  Nagorno-Karabakh conflict zone, Sergey Lavrov stressed that the  Russian-Turkish monitoring center will operate exclusively in a  remote mode.  Views were exchanged on the military-political  situation in the region and the efforts to stabilize it.   Highlighting the repatriation of refugees and the return to normal  life in Artsakh, Prime Minister Pashinyan advised that the Armenian  government will implement joint programs with the Artsakh government  to restore infrastructure and housing.