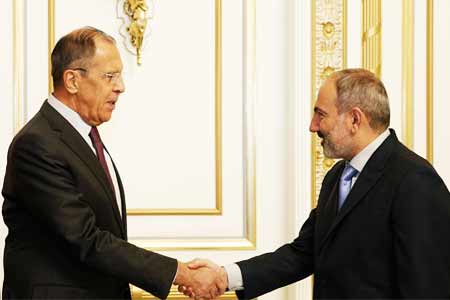 To recall, yesterday head of the Russian state held an online meeting  on the Russian peacekeeping mission in Nagorno-Karabakh.

As Sergey Lavrov said at the meeting, "during these days, after  November 13, we are in close contact with the co-chairs, the  Americans and the French, who visited Moscow. And I met with them, my  colleagues met with them. They were provided with full information,  which once again confirmed that the agreement that the Presidents of  Russia, Azerbaijan and the Prime Minister of Armenia signed on  November 9 is fully in line with the principles that were agreed upon  in recent years between the OSCE Minsk Group Co- Chairs and received  worldwide support >.

At this stage, according to the head of the RF Ministry of Foreign  Affairs, the department is concentrating on working with  international organizations. First of all, this is the International  Committee of the Red Cross, whose President, Peter Maurer, paid a  visit to Moscow and discussed in detail the situation and prospects  of our cooperation in the Ministry of Foreign Affairs, the Ministry  of Defense, the Ministry of Emergency Situations, with our other  departments, which are somehow involved in this work. "The uniqueness  of the Red Cross lies in the fact that it has a representative office  in Yerevan, Baku and Stepanakert. They were forced to leave  Stepanakert during the period of hostilities, but they returned there  several days ago. We are interested in the closest contact with our  peacekeepers and with the Interdepartmental Center for Humanitarian  Response. You have already outlined these tasks, we are actively  guided by them, "Lavrov said.

As the head of the Russian Foreign Ministry noted, more needs to be  done through the UN organizations.  These are the Office of the  United Nations High Commissioner for Refugees, the World Food  Program, the Office for the Coordination of Humanitarian Affairs,  UNESCO.

These bodies do not have representation in the region everywhere,  although appropriate efforts are being made.

"It is important for the Commissioner for Refugees to compile  reliable statistics on the number of people who need help. According  to estimates, we are talking about about 90 thousand people who left  for Armenia, and about 45 thousand Azerbaijanis, who, against the  background of hostilities, left the regions adjacent to  Nagorno-Karabakh.

Of course, we are interested in this management, to get the support  of all relevant parties so that they can expand their work, including  helping to return those who were forced to leave their homes. Our  peacekeepers are actively promoting these processes.

And, of course, a separate issue is the so-called historical refugees  from Azerbaijan who left the region back in 1992-1994 during that  war. The World Food Program has officially received an invitation  from Yerevan. At the same time, they came into contact with  Azerbaijan, although there, in Baku, there has been no office of the  World Food Program since 2013, but a corresponding proposal with  those ideas that can be used to help with food was sent to Baku,  including. I spoke today with the Director-General of UNESCO, Ms  Azoulay. She issued a statement today, in which she announced her  intention to send a special UNESCO mission to the conflict zone to  assess the situation and the scope of tasks on the spot in terms of  restoration and protection of cultural heritage, places of worship,  and assistance in the field of education.  Of course, we are talking  about assistance to both the Armenian and Azerbaijani sides.

We proceed from the premise that all these UN structures that I  mentioned, which you mentioned, Mr President, should be encouraged to  more actively offer their capabilities to the parties. The UN  officers themselves know these possibilities best. And we called on  our partners in the troika of co-chairs: the Americans and the  French, other members of both the OSCE Minsk Group and the UN  Security Council, to encourage such activity of international  organizations in every possible way.

Unfortunately, there is a tendency, we feel it, which is aimed at  trying to slow down the implementation of the statements of the  presidents of Russia, Azerbaijan and Armenia of November 9, not to  allow this statement to take place in full, although everyone must  admit that it is being successfully implemented. And we also observe  attempts to change the nature of the peacekeeping operation, while  latent, but they are taking place.  Therefore, our task is, together  with the Ministry of Defense, the Ministry of Emergency Situations,  with our border guards, we participate in assessing the situation on  the ground, and we correlate accordingly the signals that we send to  international organizations, encouraging them more actively offer  their opportunities for the speedy settlement of humanitarian issues,  issues of preserving cultural heritage in the conflict zone, " Sergey  Lavrov said.