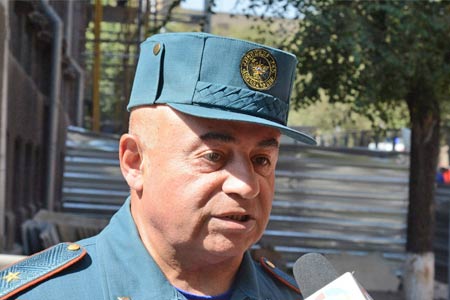 ArmInfo. Prime Minister of  the Republic of Armenia Nikol Pashinyan introduced the new head of  the department Andranik Piloyan to the staff of the Ministry of  Emergency Situations.

According to the press service of the government, the prime minister  noted that the sector and nature of work in the Ministry of Emergency  Situations is completely new for Andranik Piloyan, since the latter  is transferred to the Ministry from the army. "But, in fact, the  Ministry of Emergency Situations and the Rescue Service are also part  of our Armed Forces, and in this regard, we can say that the changes  are not so great," the prime minister said.

Andranik Piloyan thanked the Prime Minister for the high confidence  shown. He noted that in the course of work in the Ministry of  Emergencies, he will try to introduce all the best acquired in the  army into this structure, and to multiply what the former Minister of  Emergency Situations Feliks Tsolakyan has invested.

"In any case, I am here at your call, with only one condition - to be  useful to our nation and homeland," he stressed.