Premier: We found ourselves in an uncontested situation 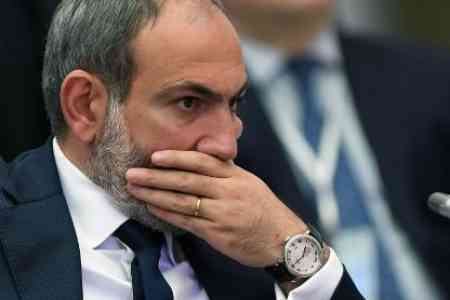 ArmInfo.We found ourselves in an uncontested situation.  On November 10, Prime Minister of the Republic of Armenia Nikol Pashinyan stated this on November 10 live  from his Facebook page, explaining the decision taken the day before  to end hostilities, on the terms of the transfer of territories.

He stated that the Defense Army and the political leadership of  Artsakh formulated a task - to stop the war a minute earlier in order  to avoid more serious consequences.   - said the prime minister.

Since the situation developed in this way, when the Armenian side was  forced to make such concessions, Pashinyan explained why this  decision was not made on September 27, when military operations had  just begun. "For the simple reason that the conditions of the  ceasefire remained the same. That is, the transfer of 7 regions to  Azerbaijan. But we could not take such a step, because we believed  that the Artsakh Defense Army and the Armenian people would be able  to eliminate such a need, "the head of government said.  From this,  in his opinion, the following question arises - why now the Armenian  leadership has agreed to such conditions?

"Because, listening to the assessments and reports of the Defense  Army, it became obvious to us that the consequences of further  hostilities would be even more difficult, and they must be stopped in  any way at this moment. Yes - to accept the conditions, because as a  result of the continuation of hostilities their acceptance would be  inevitable. It's true. And it is important to say that was this war  really inevitable? I want to say frankly that there was only one  possibility to avoid this war - to surrender these territories to  Azerbaijan without accepting the status of Karabakh. And this, in  fact, was the basis of the negotiation process, "inherited" from the  previous authorities, "Pashinyan said.

He said that since the beginning of the negotiation processes from  94-95. To this day, the priority of the Nagorno-Karabakh negotiation  process has been the transfer of 7 regions to Azerbaijan. At the same  time, there was a question about clarifying the status of  Nagorno-Karabakh. However, over 25 years, Azerbaijan, thanks to its  financial and military capabilities, step by step ousted from the  negotiation process the issue of recognizing the status of Karabakh  outside Azerbaijan.

He admitted that the Armenian side failed to create opportunities for  discussions on the recognition of Nagorno-Karabakh within the  framework of the negotiations. "And we accepted the negotiation  process at the point when for 25 years the priority in the  negotiations was the issue of surrendering the territories to  Azerbaijan," he stressed.

The Armenian side, according to Pashinyan, tried to postpone this  issue for decades, but in the end, as he noted, a moment comes when a  situation has already been formed where the issue of surrender of  territories is a consensus for the international community.

As of May 2018, according to the prime minister, this was a consensus  between the co-chairs of the OSCE Minsk Group. And even in 2016, it  was already imperative to implement this condition. , - he  said.

The prime minister noted that this is an oversized topic, to which we  will return repeatedly, moreover, there are still many questions to  which the country's leadership will answer. In this vein, he called  for keeping calm, martial law and uniting around the Armenian  statehood in the name of our country, people and Artsakh.

In addition, the Republic of Armenia will return the Kelbajar region  to the Republic of Azerbaijan by November 15, 2020, and the Lachin  region by December 1, 2020, leaving behind the Lachin corridor (5 km  wide), which will ensure the connection of Nagorno-Karabakh with  Armenia and at the same time will not affect Shushi.

By agreement of the parties, the construction of new transport  communications linking the Nakhichevan Autonomous Republic with the  western regions of Azerbaijan will be ensured.