Arakchi: We have a common approach with Russia on Nagorno-Karabakh 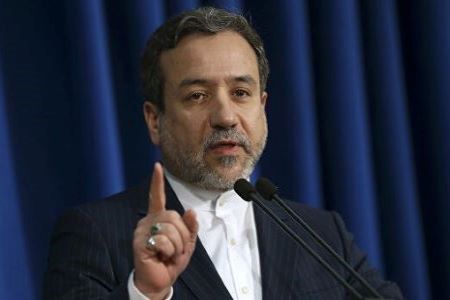 ArmInfo. Deputy Foreign Minister for Political Affairs and Special Envoy of the Islamic Republic of Iran for the settlement of the Nagorno-Karabakh conflict, Abbas Arakchi, today after his visit to Moscow, wrote on Twitter that Iran and Russia have  common approaches to the Nagorno- Karabakh conflict. IRNA reports.

"I presented the Iranian initiative today during a meeting with  Russian Deputy Foreign Minister Andrei Rodenko in Moscow. Iran and  Russia take a similar approach to the Nagorno-Karabakh conflict.  Also, as always, we had good consultations with Sergei Ryabkov about  the future of a vigorous deal, "he wrote.  Abbas Arakchi, who visited  Moscow on Thursday morning as a special envoy of the Islamic Republic  of Iran to advance Iran's initiative to resolve the Nagorno-Karabakh  conflict and consult with Russian officials, said Tehran's plan was  based on humanitarian principles and the demands of the parties. In  the evening, Arakchi was already in Yerevan, where he met with  Armenian Foreign Minister Zarair Mnatsakanyan.

Before meeting with Mnatsakanyan, in an interview with a journalist  of the state radio television of Iran, Arakchi said: "During my visit  to Azerbaijan, I had close negotiations with officials of this  country. From Baku I flew to Moscow, where effective negotiations  were also held. In Yerevan, I have meetings with a number of  officials will be held.This is a difficult time and there is a need  to take a decision on the process of an early peace settlement in  order to open the way for peace.

It hurts that the number of victims is growing. Aggression against  civilians is unambiguously condemned and an attack on civilians,  including a hospital, the death of innocent people is unambiguously  unacceptable. It is for this reason that we hope that the path for  peace will be smoothed out as soon as possible.

In Yerevan, the center of my meetings will be this issue. We hope  that the program presented by Iran can smooth the road to peace. Iran  is  a neighbor for Armenia and Azerbaijan. We have old and friendly  relations with both countries. In Iran, Armenians and Azerbaijanis  live in harmony alongside their Iranian compatriots. In this crisis,  we are committed to international principles. We believe that Iran's  goodwill and opportunities can be used to establish a long-term  truce.

The goal of the initiative of the Iranian Islamic Republic is to  establish sustainable peace in the region, and we hope that, of  course, in cooperation with other countries, we will be able to  achieve this goal, since Iran has such opportunities. "