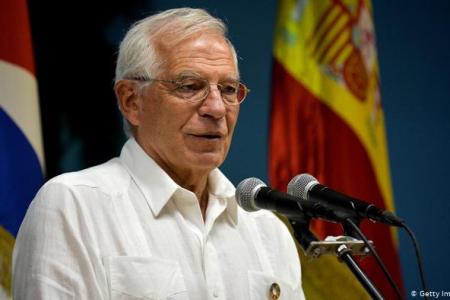 Mnatsakanyan presented the latter with detailed information on  Azerbaijan's violation of the third ceasefire agreement reached in  Washington, and, as a result, ongoing attacks on populated areas and  the civil infrastructure of Artsakh.

As reported by the Armenian Foreign Ministry, Mnatsakanyan drew  Borrell's attention to the fact that during this very conversation,  Azerbaijan is inflicting strong missile strikes on the capital of  Artsakh - Stepanakert, and the second largest city of Shushi, and  also targeted the maternity hospital.  The RA Foreign Minister also  touched upon the humanitarian situation in Artsakh as a result of  Azerbaijan's actions.

Referring to the destabilizing steps of Turkey in the South Caucasus,  the Armenian Minister stressed that such actions pose a threat to  both regional and international security. The head of the Armenian  Foreign Ministry confirmed Armenia's adherence to an exclusively  peaceful settlement of the conflict within the framework of mediation  of the OSCE Minsk Group co-chairmanship. Both sides stressed the need  to implement the ceasefire agreements and establish a stable,  controllable ceasefire.