President of Karabakh: The security and rights of our people are not  subject to compromise 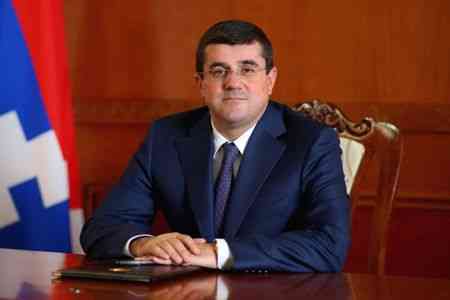 ArmInfo.Despite the efforts of the OSCE Minsk Group Co- Chairs to establish humanitarian ceasefire, the military-political leadership of Azerbaijan continues  to ignore and violate all agreements reached for this purpose. This  is stated in the statement of Artsakh President Arayik Harutyunyan,  posted on his Facebook page.

As in previous cases, the President of Karabakh notes, the agreement  reached with the mediation of the United States with the  participation of the co-chairs of the OSCE Minsk Group, reaffirmed  the commitment of the parties to the observance of the humanitarian  ceasefire, agreed in Moscow on October 10 and October 17 in Paris,  initiated by the Presidents of Russia and France. Official Baku again  rudely violated it today. Especially in the afternoon, when  Azerbaijan resumed offensive operations along the entire front line  with the use of missiles and artillery.

"All this confirms that the Azerbaijani authorities, with the  unconditional patronage of the Turkish authorities and the support of  hired terrorists, do not intend to resume a peaceful dialogue. They  make it clear that they will continue their military operations for  the final eviction of Armenians from Artsakh.  Therefore, our  national task is to fight for the safe and dignified existence of the  Artsakh Armenians in their homeland. The security and rights of our  people are not subject to compromise, our determination in this  matter is above all circumstances and desires, "the statement of the  President of Karabakh reads.