Aliyev has a new headache: Where do Armenians get so much money for  armaments? 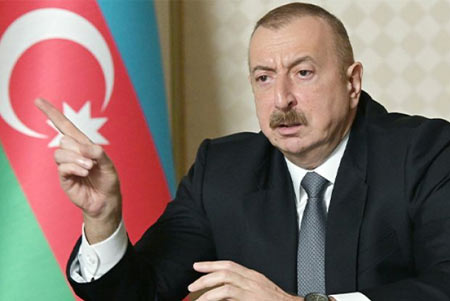 ArmInfo.The head of dynastic Azerbaijan, Ilham Aliyev, once again appealed to the people, once again demonstrating his "peacefulness and tolerance" to the  international community, threatening to use Turkish F-16 fighters in  the war with the people of Artsakh.

Thus, Aliyev once again assured that the aggression of Azerbaijan  against Artsakh and civilians is aimed at restoring historical  justice, although what kind of historical justice he had in mind  remains unclear, especially if we consider that the entire history of  the Republic of Azerbaijan is a century old.

He also admitted that the Azerbaijani propaganda machine in recent  years has done a great job of informing the world community about the  "realities of the South Caucasus", apparently implying attempts to  falsify and distort real historical facts and events.

Aliyev criticized the OSCE Minsk Group co-chairs, expressing  dissatisfaction with the fact that they do not put pressure on  Armenia. "I have repeatedly called on France, Russia and the United  States to impose sanctions against Armenia. Nagorno-Karabakh is the  only issue on which the positions of these countries coincide. This  is because the occupation and the status quo met the interests of the  co-chairing countries and Armenia," the president said.

And in order for the Azerbaijanis not to have decadent sentiments in  connection with the information vacuum created in their country,  Aliyev assured that international players began to actively declare  the need to stop hostilities, attempts are being made to save Armenia  from the "defeat".

"We are creating new realities! The conflict must be resolved either  by peace or by war. We are ready to stop as soon as Baku presents a  clear timetable for the withdrawal of Armenian troops," Aliyev said,  alleging that Baku is ready for a political or military solution to  the conflict and the main thing is to achieve its complete and early  settlement.

At the same time, the dictator of Azerbaijan expressed  dissatisfaction with the fact that the supply of weapons to Armenia  has been active for the past month. The permanent Azerbaijani leader  apparently hoped that the Azerbaijani army would attack while  actively receiving military-political assistance from Turkey and not  only, and Armenia would just watch and wait, when Aliyev and his  supporters would come to capture the historical Armenian land.

He was also outraged by the fact that Armenia has enough weapons to  repulse the Azerbaijani aggressors and decided to ask where do  Armenians get so much money for armaments?

The Azerbaijani leader, and rolling in petrodollars, apparently does  not realize that Armenia is rich not in money, but in people with a  patriotic spirit, ready to give the most precious thing - their lives  for the Motherland, and they certainly will not spare money for lead  for the Aliyev regime.

"The mediators must either achieve the withdrawal of the occupying  forces, or move away from the path of Baku. The mediating countries  over the past month have only tried to put pressure on Azerbaijan.  These states must abandon the biased position," Aliyev said.

Regarding the issue of the deployment of the F-16 aircraft of the  Turkish air force in Azerbaijan, he rejected the previous lie on  denying their presence in the country, since the facts are stubborn,  and told the tale that Turkish aircraft arrived to participate in the  exercises, and after the escalation situations remained on the  territory of Azerbaijan, while adding that the F-16s will be used to  prevent aggression from abroad.

And in conclusion, he cynically stated that Azerbaijan is ready to  ensure the safety of every Armenian living in Nagorno-Karabakh, and  that the peoples will peacefully coexist throughout the country,  apparently forgetting how the Azerbaijani military mocks and shoot  Armenian war prisoners and civilians and how the terrorists  transferred for petrodollars from the Middle East regions beheaded  them.