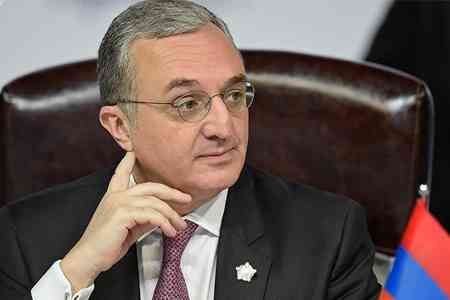 ArmInfo. As a follow-up to  the recent telephone contacts of the President of the Russian  Federation with the leaders of Armenia and Azerbaijan and in the  continuation of the Russian mediation efforts to end hostilities in  the zone of the Nagorno-Karabakh conflict, on October 21, the meeting  of RA Foreign Minister Zohrab Mnatsakanyan with Russian Foreign  Minister Sergey Lavrov took place.

As reported by the press service of the RA MFA, the agenda of the  talks included the combat situation in the zone of the  Nagorno-Karabakh conflict and the issue of the implementation of the  ceasefire agreements.

Praising the direct efforts of Russia and President Putin to reach a  ceasefire agreement, Mnatsakanyan said that the agreements reached  remain on paper due to Azerbaijan's perfidious position and  consistent steps aimed at destabilizing the situation.

Reaffirming Armenia's commitment to the commitments undertaken by the  Moscow ceasefire agreement of October 10 and reaffirmed on October  17, the Armenian Minister highlighted the priority of establishing a  stable ceasefire regime controlled by a verification mechanism.

It is also worth noting that Lavrov today also met with his  Azerbaijani counterpart Jeyhun Bayramov.