Serzh Sargsyan: Direct negotiations with Alev are a mistake, as  Azerbaijan will never agree to the recognition of Karabakh`s  independence 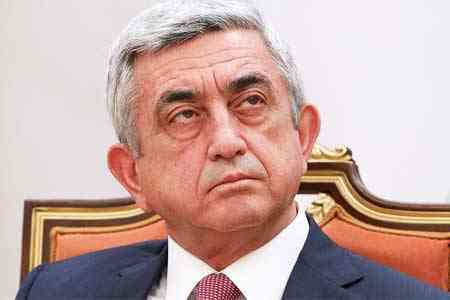 ArmInfo. The President of  Azerbaijan has constantly promised his people that his army can  quickly capture Nagorno-Karabakh if they so wish. The third president of Armenia, Serzh Sargsyan, stated this in an interview with The Independent.

Sargsyan noted that now the ARF is using all the weapons in its  arsenal, including mercenaries, drones sent by Turkey, but in three  weeks they managed to deepen in only one direction, which does not  mean the end of the war.

"The Armenian army is a combat-ready army with thousands of  professionals dedicated to their cause, experienced officers who have  gone through two wars, generals, tens of thousands of brave soldiers  armed with sufficient weapons for a defensive war. But,  unfortunately, many people died, inflicting heavy losses on the  Azerbaijani armed forces. and to the mercenaries, defending  themselves. Strategically, this war is madness, the civilian  population pays for Aliyev's mad dream, "the third president  emphasized.  When asked why after Nikol Pashinyan came to power,  there was already a threefold large clash between the Armenian and  Azerbaijani sides, Sargsyan noted that this was the first major clash  over the past time.  "What happened in July was a small collision,  and, in my opinion, it could have been solved differently.  But I  agree that my receiver did not follow the path that we have long  achieved success, he decided how he said to start negotiations from a  new point.

I can say that this conflict has never been frozen, even if we  managed to guarantee the security of Armenia and Nagorno-Karabakh.

Azerbaijan periodically, however, on a smaller scale, continued to  attack us all these years. Real peace is possible only through  negotiations. This was achieved, for example, in Kazan. As a result  of many years of achievements and failures, the Foreign Ministers of  Armenia and Azerbaijan in 2011 agreed on a package solution. The  presidents of the Minsk Group co-chairing countries expressed  satisfaction with the progress.  Russia made a public statement: "The  President of Azerbaijan and I were invited to Kazan to confirm the  agreement reached. When we were all on the same floor, Aliyev took a  sheet of paper with more than a dozen significant changes from his  pocket. All these provisions were discussed for months during the  negotiations of the parties, clarified in detail or removed in a  well-drafted document. Everyone was shocked, but despite the  disappointment of the mediators, Aliyev said he would not agree to  the document.  I do not agree that the negotiated settlement of the  issue in Kazan has been exhausted. Yes, in 2016 Aliyev violated the  ceasefire and attacked Nagorno-Karabakh. We defended ourselves  bravely, we did not surrender a single settlement, Aliyev had to  restore the 1994 ceasefire agreement. The ceasefire was signed by the  authorities of Azerbaijan, Armenia and Nagorno-Karabakh. Then, a few  weeks after the hostilities, the Minsk Group co-chairs in Vienna and  St. Petersburg declared that they respected the 1994-1995 ceasefire.

They noted the need to create a mechanism for investigating incidents  and expand the powers of the OSCE Minsk Group co-chairs. And although  Aliyev did not want to agree with this, we continued negotiations  through mediators, the co-chairs of the Minsk Group, "Sargsyan  stressed. The third president noted that the unresolved conflict is  also associated with a lack of trust.

"The Armenian-populated Nagorno-Karabakh, which we call Artsakh, was  handed over to Azerbaijan by Stalin as an apple of discord. Since  then, Azerbaijan has been trying to free the land from the Armenian  population, blocking diplomatic decisions. I am deeply convinced that  direct negotiations with Alev are a gross mistake for a very simple  reason. : Azerbaijan will never agree to the recognition of the  independence of Nagorno-Karabakh, in general, international practice  shows that the exercise of the right to self- determination occurs  through coercion by mediators.  And it is no coincidence that the  events took place in 2016. A few months after large-scale hostilities  in October, the President of Azerbaijan admitted behind closed doors  at a cabinet meeting that he was being forced to recognize the  independence of Nagorno-Karabakh. I believe that the aforementioned  approaches to the negotiation process are the cornerstone, and  therefore I agreed to be elected Prime Minister of the Republic of  Armenia after two terms in office, as I was convinced that the change  of the main negotiators would be disastrous. Continuity was vital,  "he said.

Sargsyan stated that he and his team, as well as other opposition  political forces, have repeatedly appealed to both the current  government and the NKR President, offering their services. "However,  I must state with regret that they did not contact us. I cannot  comment on internal relations now. Armenia is facing external  aggression, so it needs to be united," the third president said.

He also noted that now it should not be about winning or losing a  war, but about peace.  "When the Soviet Union was on the verge of  collapse, the Self-Defense Committee of Nagorno-Karabakh, which I  headed, undertook to protect our people from ethnic cleansing, which  we witnessed in Baku, Sumgait and other places. International sources  note that military actions in Artsakh before the ceasefire 1994 cost  the lives of nearly 30,000 people on all sides.

We defended our homes, we won the war, a ceasefire was established.  However, we could not make peace with our neighbor, who never gave up  his insatiable desire to conquer the mountains of Karabakh. That is  why we need international mediators of the OSCE Minsk Group, one of  the co-chairs of which is Russia, with its vast experience and  capabilities, "Sargsyan stressed.

According to the third president of Armenia, after his resignation,  he did not communicate with Aliyev.  "The message to Azerbaijan, as  well as to all other parties to the conflict, is clear: this conflict  cannot be resolved by military means or by any other means that will  force Armenians to leave their homes in Nagorno-Karabakh. Peace  should be established exclusively through negotiations," he said.

Touching upon the role of Turkey in this process, Sargsyan noted that  Ankara and Baku prepared for a very long time and took this process  seriously." According to intelligence and credible media reports from  many countries, this war involves mercenaries from Syria and Libya,  sent by Turkey. Turkish drones are a big support for Azerbaijani  attacks. It can be concluded that decisions on military operations  are made jointly.  You should know that we have tried to improve  relations with Turkey. When I became President in 2008, I came up  with a new initiative by inviting then Turkish President Abdullah Gul  to Yerevan to begin negotiations on the normalization of  Armenian-Turkish relations.

Regional peace and security can greatly benefit from a normalization  of relations with Turkey without preconditions.

The Foreign Ministers of Armenia and Turkey signed the Zurich  Protocols on October 10, 2008 in the presence of the Foreign  Ministers  of Switzerland, Russia, USA and France.

However, literally a day later, the then Prime Minister of Turkey  Erdogan said that the ratification of the protocols would be possible  only when the security forces of Armenia leave Karabakh, thereby  suspending the whole process, "Sargsyan concluded.