Media: More than a thousand militants from Syria were transferred to  the zone of the Karabakh conflict 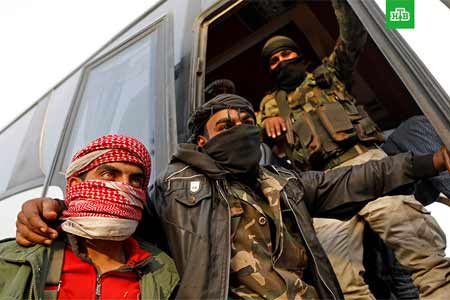 ArmInfo.More than a thousand militants from Syria have been transferred to the zone of the Nagorno-Karabakh conflict. This was reported by RIA Novosti with  reference to an informed source.

"Last Friday, more than 1,000 militants were sent to fight in  Nagorno-Karabakh, and another party is being prepared to send in the  coming days," the source said.

Earlier, on October 14, The Wall Street Journal wrote about hundreds  of Syrian militants associated with Turkey deployed to Karabakh and  about the readiness to send "hundreds more" of militias to the  Karabakh conflict zone. The Washington Post wrote on the same day  about the deaths of 52 Syrian mercenaries in the Karabakh conflict  zone.

Syrian leader Bashar al-Assad said that fighters from Syria are being  deployed to Karabakh, and Turkey is using terrorists from Syria and  other countries in Nagorno-Karabakh.

In turn, the director of the Foreign Intelligence Service of the  Russian Federation, Sergei Naryshkin, also reported that, according  to the information available to the SVR, mercenaries from  international terrorist organizations fighting in the Middle East are  actively pulling into the conflict zone, and we are talking about  hundreds and even thousands of radicals.

On the transfer of 300 Syrian militants through Turkey to Baku also  told French President Emmanuel Macron in early October. The leaders  of Azerbaijan and Turkey, despite having already provided numerous  factual evidence of their involvement in hostilities, continue to  claim that they do not use the services of mercenaries.