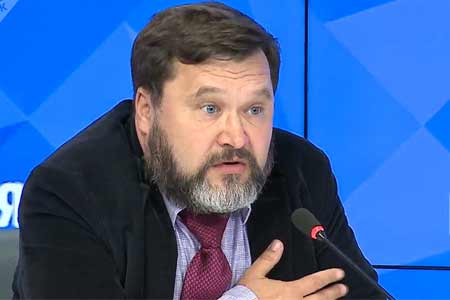 ArmInfo.The main goal of Turkey in the current war in Artsakh is the creation of a land corridor connecting Nakhijevan with Azerbaijan. A similar opinion was  expressed to ArmInfo by the chief researcher of the IMEMO RAS, the  president of the Scientific Society of Caucasian Studies Alexander  Krylov.

"Today, Ankara, of course, solves its own problems in Artsakh.  However, for the Turks this direction is only of secondary  importance. The main thing for Turkey is the capture of Meghri, a  city located on the territory of Armenia. Today, this is perhaps the  main goal of Turkey in the region. That is why the main Azerbaijani  the onslaught takes place in the southern direction, along the Araks  River, "he said. Thus, according to the political scientist, the  Turkish factor in the motivation of the Azerbaijani aggression is  evident. At the same time, one can already state the failure of the  Azerbaijani-Turkish plans, the failure of the blitzkrieg to seize  Artsakh. In this light, the tandem, according to Krylov, needs time  to develop a new plan of action, military and political regrouping.

The political scientist stressed that Azerbaijan and Turkey had been  preparing for the offensive for years, having concentrated a powerful  military grouping equipped with modern weapons in the operation area.   Taking into account the superiority of this contingent over the  Armenian forces concentrated opposite, Baku and Ankara staked on a  quick and decisive victory. However, with the failure of these plans,  the Azerbaijani command, according to its forecasts, will have to  prepare for a long war.

In this light, according to the political scientist, it was initially  obvious that hostilities would not stop after the Moscow ceasefire  agreement. Krylov stressed that one of the parties does not respect  the truce and only uses it in order to improve its own situation.  Against this background, large-scale military supplies to Azerbaijan  from Turkey, Israel and Belarus continue. In parallel, militants from  various terrorist organizations are being transferred to the Karabakh  front.

"All this testifies to the persistence of hope for the success of the  new offensive in Ankara and Baku. In this light, it is obvious that  if the OSCE Minsk Group co-chair countries fail to find ways to  convince Azerbaijan of the unacceptability of a military solution to  the conflict, the offensive on the Karabakh front will continue. the  war, apparently, will take on a protracted nature, "Krylov summed up.