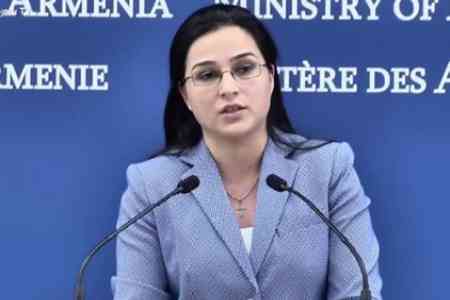 ArmInfo. This Azerbaijani aggression against Artsakh is distinguished by the fact that the civilian population and infrastructure are deliberately targeted by  the Azerbaijani Armed Forces , thus causing serious human and  property damage. Press secretary of the RA MFA Anna Naghdalyan  announced this on September 1 during a briefing.

In this context, she touched upon today's shelling of journalists in  the city of Martuni of Nagorno- Karabakh, stating that it happened a  few hours after the RA Foreign Ministry announced the broad feedback  of the media and the desire to cover events in the zone of the  Nagorno-Karabakh conflict.  Naghdalyan reminded once again that  representatives of more than 50 leading international media, about  200 journalists, 100 of whom are already working in Artsakh, have  received accreditation at the RA MFA.

"The journalists suffered this morning, in Martuny, where the  Azerbaijani Armed Forces once again attacked the civilian population.  The journalists of Le Monde suffered, one of whom has already been  operated on in the Stepanakert hospital, and the Artsakh government  announced its intention to transfer him to Armenia," she said adding  that vehicles carrying journalists were also targeted, despite the  fact that they bore identification marks. Noting that representatives  of the Armenian media also suffered, she wished everyone a speedy  recovery.

Naghdalyan once again stressed that such actions of Azerbaijan in  relation to the civilian population and infrastructures, as well as  journalists, are a gross violation of the norms of international  humanitarian law.  "Such behavior causes condemnation," the  representative of the RA Foreign Ministry said, categorically  rejecting the assurances of the Azerbaijani side that journalists  were at the frontline. According to her, this once again indicates  that the targets of the Azerbaijani Armed Forces are civilian  infrastructures and civilians.

It should be noted that today as a result of the shelling of the  Azerbaijani Armed Forces by a group of journalists in Artsakh, four  media representatives, including two citizens of Artsakh, were  injured.