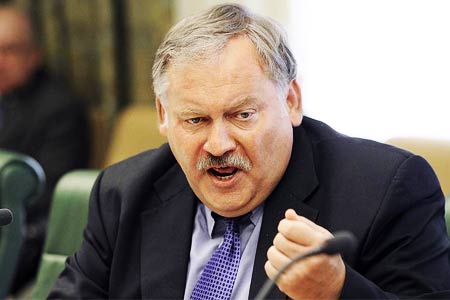 ArmInfo. It is obvious that  Azerbaijan decided to demonstrate its ability to solve the Karabakh  problem by force. RF State Duma lawmaker Konstantin Zatulin expressed  a similar opinion to ArmInfo.

"For propaganda purposes, all this is accompanied by accusations that  Armenia started all this action.  Although everyone understands that  Armenia and Nagorno-Karabakh did not need all this at all - both  republics stand for the status quo. While Azerbaijan stands for  changing it, and demonstrating the ability for revenge. I think that  Turkey's desire to increase its weight and implement its plans in the  region played a decisive role in initiating a new war, "he stressed.

According to the parliamentarian, this is exactly what all the latest  statements by the military-political leadership of Turkey are aimed  at. In particular, the demands for the withdrawal of Armenians from  the territory of Karabakh. Meanwhile, the Armenians have been living  in Karabakh throughout the entire written history and, in this light,  they can no way "leave" it. Karabakh, according to Zatulin, belongs  and has always belonged to the people of Karabakh, there are Armenian  monasteries, etc., etc.

The Russian parliamentarian stressed that the accusations that the  Armenians are building their statehood on a foreign land are  ineligible, given the fact that in 1991 Azerbaijan left the USSR  without Karabakh, which at that time Baku no longer controlled. The  Karabakh conflict began in 1988 with the Sumgait and Baku pogroms.  And today it is Azerbaijan that violates the ceasefire agreements  reached in 1994.

In this light, Russia and other mediators should work towards an  immediate ceasefire. At the same time, the violator - Azerbaijan,  according to Zatulin, should not gain benefits based on the results  of its behavior.  Ilham Aliyev, according to his estimates,  constantly withdraws from negotiations, since it seems to him that  success in his undertakings is still possible and he will certainly  achieve it.  "To our great regret, unlike the war of April 2016,  today there is another will here - the Turkish one. If the  destruction of the Armenian Su 25 attack aircraft by the Turkish F16  fighter is confirmed, and the Azerbaijani army does not have such  aircraft, this will mean Turkey's direct intervention in the  conflict. In this light, it is necessary to find the wreckage of the  shot down SU 25 and establish how it was shot down.  Today it is  fundamentally important, "Zatulin emphasized.

"Russia's formal approach to this conflict is that we must be friends  with both Armenia and Azerbaijan.  However, at the same time, we have  obligations to Armenia both within the CSTO and within the framework  of bilateral agreements. And we must fulfill these obligations. And  for this there are all the necessary legal instruments. Armenia, not  Azerbaijan, is a member of the EAEU. And Azerbaijan is in an alliance  with Turkey. Aliyev's plan of "returning Karabakh by military means"  is initially doomed to failure, Zatulin emphasized.

Starting at 07:10 am on September 27, the settlements, as well as the  military units of the Republic of Artsakh, were subjected to  intensive artillery and rocket fire by the Azerbaijani army. After  that, the enemy's motorized rifle and tank subunits launched an  offensive in the northern and southeastern directions. At the moment,  units of the Artsakh army are fighting, repelling enemy attacks.