Rouhani: Any foreign interference in the Karabakh issue will not only  fail to resolve the problem, but will complicate the situation 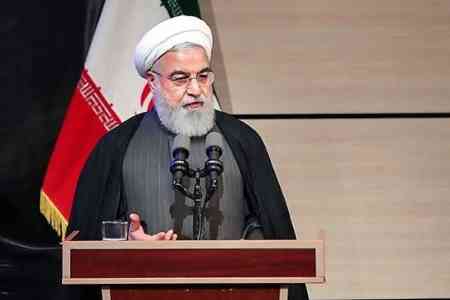 ArmInfo.Any foreign intervention in the Nagorno- Karabakh issue will not only fail to  resolve the problem, but will prolong conflicts and tensions and  complicate the situation. As IRNA reports with reference to the press  service of the Iranian president, Iranian President Hassan Rouhani  said this during a telephone conversation with Armenian Prime  Minister Nikol Pashinyan.

During the talks, Rouhani expressed deep concern over the existing  tensions between Armenia and Azerbaijan and the ongoing hostilities  in Nagorno-Karabakh. "War and military conflicts are not the best way  to solve problems and disputes, but only complicate the situation,"  the Iranian president said.  Rouhani added that stability and  security can be the cornerstone of the region's development, noting  that the region cannot tolerate new conflicts or armed aggression.

Referring to the long-standing disagreements between Armenia and  Azerbaijan over the Karabakh conflict, Rouhani stressed the need to  find a solution to this conflict within the framework of  international law and territorial integrity.

In his words, it is very important for Iran that Armenia and  Azerbaijan stop the conflict and show restraint on this issue.

Rouhani declared the readiness of the Islamic Republic of Iran to  play any constructive role that two friendly and neighboring  countries wish. "Our desire is an immediate end to the conflict, and  we should all strive to solve the problems of the region by political  means within the framework of international norms," he concluded.