Ombudsman of Artsakh: Woman and child were killed as a result of enemy shelling 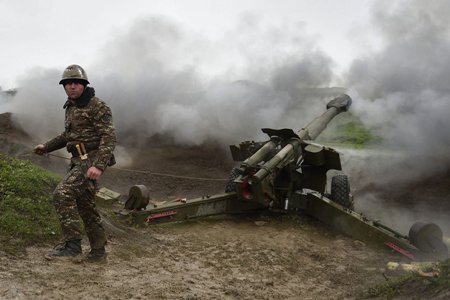 ArmInfo.  As a result of the artillery shelling from Azerbaijan, there are dead and wounded among the peaceful population of Artsakh. Artsakh Ombudsman Artak Beglaryan announced this on his Facebook page.

“Two people died in Martuni region: a woman and a child, two more were injured. Information on losses in other settlements is being specified. Schools were shelled, including those in Stepanakert. Civil infrastructure and settlements were seriously damaged, ”he wrote.

It should be noted that intense battles are currently taking place on the Karabakh-Azerbaijani line of contact. The enemy fires at the whole perimeter of the line of contact of troops from 07.15 am, using shock drones, artillery. Strikes are being delivered on settlements in the deep rear, including Stepanakert.

Earlier, the Armenian defense ministry called on the people of Artsakh to take refuge in shelters. “Early this morning, along the entire perimeter of the contact line, the enemy began active artillery fire. Civilian settlements, including the capital, Stepanakert, are also under fire. We urge the population to take refuge in shelters. At the same time, we declare that our response will be proportionate, and the military-political leadership of Azerbaijan bears full responsibility for the situation, ”the Spokesperson of the Armenian Defense Ministry Shushan Stepanyan wrote on her Facebook page.

In connection with the current situation, Armenian Defense Minister David Tonoyan has already held a telephone conversation with the Personal Representative of the OSCE Chairperson-in-Office Andrzej Kasprzyk. Tonoyan presented the situation to his interlocutor at the front line and said that Azerbaijan had begun another provocation.

At the same time, Armenian Foreign Minister Zohrab Mnatsakanyan is in constant contact with the OSCE Minsk Group co-chairs.

It should be noted that, according to the Artsakh AO, the Azerbaijani Armed Forces in the morning of September 27 began intensive shelling of the Armenian territories along the entire perimeter of the contact line of the Karabakh-Azerbaijani troops.