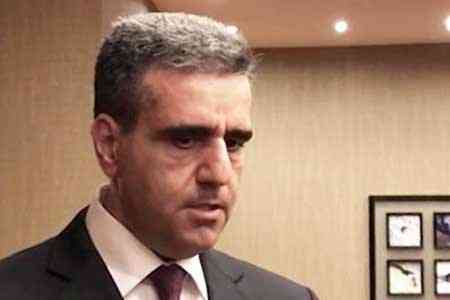 ArmInfo.. According to the results of the secret ballot, the only candidate for the post of the President of the Constitutional Court, Yervand Khundkaryan, did not  receive the required number of votes. Head of Office of the  Constitutional Court Edgar Ghazaryan, announced this on his Facebook page.

To note, in order to be elected, Khundkaryan had to receive from the  judges of the Constitutional Court 5 votes out of 9 possible.

Earlier, Speaker of the Armenian Parliament Ararat Mirzoyan signed a  law on amendments to the law "On the Constitutional Court", which was  adopted on June 30. In accordance with them, the powers of all judges  of the Constitutional Court are limited to 12 years. After the  amendments were adopted, three judges who had worked for more than 12  years were dismissed from their posts: Alvina Gyulumyan, Hrant  Nazaryan and Felix Tokhyan. Head of the court, Hrayr Tovmasyan, has  become an ordinary judge. New judges will now be elected instead. One  candidate is proposed by the Government, the second - by the  President, and the third - by the General Assembly of Judges. Edgar  Shatiryan, Candidate of Legal Sciences, became a government  candidate. At the General Assembly of Judges, Head of the RA Court of  Cassation Yervand Khundkaryan was elected as a candidate for the  Constitutional Court judge. Arthur Vagharshyan, nominated by the  President, is Doctor of Law, Professor. All three candidates were  elected by an overwhelming majority during a parliamentary meeting on  September 15. Further, a new head should be elected to the CC.