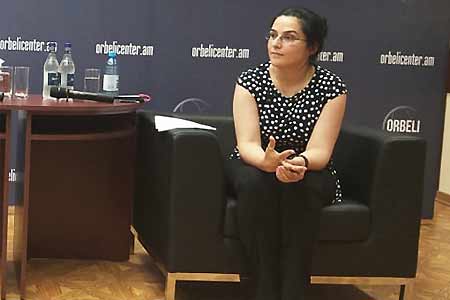 ArmInfo. Ministry of Foreign Affairs of Armenia reacted to the attacks of the President of  Azerbaijan against Of Yerevan. Thus, in the statement of the press  secretary of the RA MFA Anna Naghdalyan, in particular, it says:

"The statements of the President of Azerbaijan at the ceremony of  laying the foundation for offshore operations at the Absheron field  are deeply disappointing. They demonstrate the inability of the  leader of the neighboring country to perceive the current situation  and his own role in shaping this reality soundly and without painful  emotions.Such rhetoric, in which there are obviously unfounded and  even false statements, does not honor the leader of any country.

At the same time, Naghdalyan stressed that Armenia is aware of the  damage to the peace process caused by Azerbaijan as a result of the  aggression in April 2016 and the military escalation in July 2020.  "In order to prevent this damage from becoming irreversible, the  leadership of Azerbaijan must reconsider its policy of using force  and threats by force, abandon attempts to destabilize regional peace  and security in the South Caucasus by attracting extra-regional  forces and prepare for a peaceful settlement of the conflict.   Armenia is confident in its ability to protect the right of the  people of Artsakh to self-determination and the right to live in  their historical homeland, and it is with this confidence that we  again emphasize that there is no alternative to a peaceful settlement  of the conflict, "the representative of the Armenian Foreign Ministry  summed up.

Note that the President of Azerbaijan on September 19, in a  conversation with representatives of the leading Azerbaijani media,  attacked Yerevan with criticism. Aliyev accused Yerevan of stalling  the negotiation process on the settlement of the Nagorno-Karabakh  conflict.

"I said then, and I say today: we have no military targets on the  territory of Armenia, if we wanted to, we could go to the territory  of Armenia, we had all the military capabilities for this. But we did  not do this, because our military-political concept does not have  this, unless a serious provocation is committed against us. If it is  done, then there will be no restrictions for us, let everyone know  this. There are no restrictions. If they ignore international law,  then why should we abide by it, we will also ignore it, but it will  all end badly for them, "he concluded.