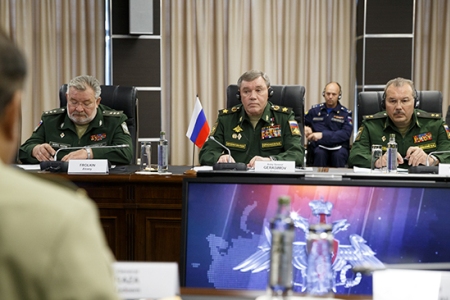 ArmInfo. Chiefs of the General Staffs of the Armed Forces of Russia and Armenia Valeriy Gerasimov and Onik Gasparyan discussed cooperation in the military sphere. This was reported by the press service of the Russian Defense Ministry.

"Military cooperation between our countries both in a bilateral  format and in international structures, the entire CSTO," Gerasimov  said at the meeting.

He is grateful to his colleague for the participation of the  contingent of the armed forces of Armenia in the Victory Parade,  which took place in Moscow on June 24, noted the high level of  training of the Armenian military personnel.

Armenia Gerasimov called Russia's ally partner in the Transcaucasus.   "It has become a good tradition for Armenian friends to participate  in the competitions of the International Army Games. And this year  the Armenian teams performed very well," added the Chief of the  General Staff of the Russian Armed Forces.

At the same time, Gasparyan thanked Gerasimov for the help of Russian  military personnel in inflicting coronavirus in Armenia.

"In fact, for about five months, a group of specialists from the  armed forces who arrived in Armenia did a great job to prevent the  coronavirus, for which we are very grateful," Gasparyan said.  In his  words, Russia is a strategic ally of the Transcaucasian republic and  attaches special importance to the development of relations with it  in Armenia.