Baroness Cox: The world owes a great debt to the people of Artsakh,  maintaining the priority of faith and freedom for the rest of the  World 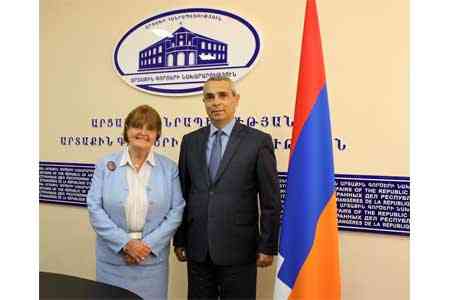 ArmInfo.Member of the British House of Lords and former Vice Speaker Baroness Caroline Cox sent a congratulatory message on the occasion of the 29th anniversary  of Artsakh's independence.

"It is a great honor and pleasure for me to send you a congratulatory  message on the occasion of the 29th anniversary of Independence.

Since I had the honor to visit you many times in the dark days of the  war, when you defended your historical country from the ethnic  cleansing of Azerbaijan, I witnessed your suffering, including the  launch of 400 Grad missiles from Shushi to Stepanakert, the massacre  in Maragha, the suffering of children who were crippled by cluster  bombs.

Your independence was achieved thanks to the heroism of all your  people, the courage of soldiers, women and children who resisted the  massive forces of Azerbaijan on the front line, who were forced to  take refuge in basements, but continued their daily life under the  attacks of aviation.

I always say that the world is deeply indebted to the people of  Artsakh, which retained the priority of faith and freedom for the  rest of the World.

After all this, you restore Artsakh with beautiful architecture, as I  always say, complementing the spirit of Armenia, you create beauty  from the ashes of destruction. May God send blessings to the people  of Artsakh today and always. With deep admiration, gratitude and  love: Caroline Cox ", - notes in the message Cox, quoted by SAR.