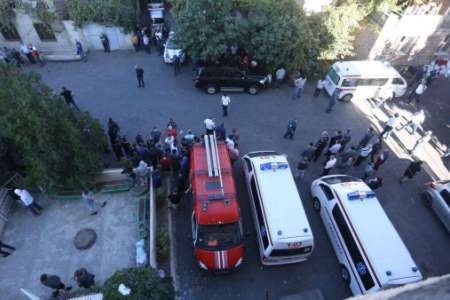 ArmInfo. The condition of one of the victims of the explosion in a residential building in Yerevan is of moderate severity, the condition of the other victim is  extremely serious. Press Secretary of the Minister of Health of  Armenia Alina Nikoghosyan announced this on her Facebook page.

"Both victims were taken to the Heratsi First University Hospital.  One of the injured is a woman. According to preliminary data, she has  a broken nose, abrasions to her face and body. She is currently  undergoing examination; doctors assess her condition as moderate.

The second injured man has burns to his limbs and body, he is in the  intensive care unit, connected to an artificial respiration  apparatus. Doctors assess his condition as extremely serious,  "Nikoghosyan said, promising to provide additional information later.

In turn, Armenian Prime Minister Nikol Pashinyan on his Facebook  page, in particular, wrote: "This morning, as a result of an  explosion, a 4-storey building at Rainisa 1 in the administrative  district of Kanaker-Zeytun collapsed. According to preliminary data,  the cause of the explosion There was a gas leak. 12 apartments in the  same entrance partially collapsed. 19 residents independently or with  the help of rescuers left the destroyed part of the building.  According to preliminary data, three citizens remained under the  rubble. Two rescuers pulled out. One was pulled out a few minutes  ago. Both are conscious. In the morning. visited the scene and got  acquainted with the situation on the spot. Rescue work continues. "