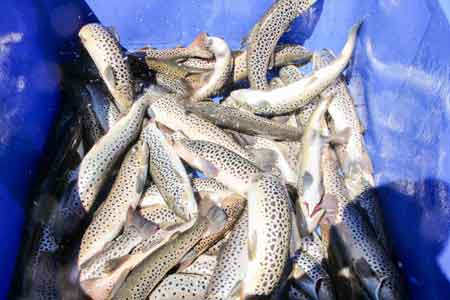 ArmInfo. Deputy Minister of Economy of Armenia Tigran Gabrielyan and Arman Khojoyan visited a fish farm established in Gegharkunik region within the framework of the comprehensive program "Ishkhan stock restoration and fish farming  development". This was reported by the press service of the ministry.

Automatic sorting equipment, installed in the coastal zone of Lake  Sevan, allows you to organize the sorting of fish by weight.

During the visit, using the aforementioned equipment, about a ton of  marketable fish was sorted. In order to restore ishkhan reserves in  Lake Sevan, part of the fish raised in the fish farm is released into  the lake, and the other is used for industrial purposes. Thus, the  cultivation of these endemic fish species has not only important  ecological, but also industrial significance.

Vardan Mamikonyan, Executive Director of the Sevan Ishkhan Stock  Recovery and Fish Farming Development Fund, noted that the farm grows  about 220 tons of fish of the Gegharkuni and summer bakhtak species.  He stressed that thanks to the launch of the sorting device and a  more efficient organization of work, from an economic point of view,  it was possible to achieve better results. It is expected that by the  end of the year the volume of sales of Ishkhan on the domestic market  will double, and the price will gradually decrease.

In 2019, about 6 thousand tons of fish and fish products were  exported from the republic, and, despite the current epidemiological  situation, at the moment the export volumes are not inferior to the  indicators of the same period last year. According to the Deputy Head  of the Department of Primary Agricultural Products Tigran Aleksanyan,  the export volumes of other fish products, including caviar, are also  gradually increasing in the republic (their figure in 2019 was about  350 tons); the demand for Armenian-made caviar abroad also increased.

During the visit, the programs and activities implemented in the  field of agriculture, carried out within the framework of state  support, were also discussed, problems in the field of fish farming,  as well as promising programs for the development of fish farming  were discussed.