Green activists hold a protest against the development of Amulsar 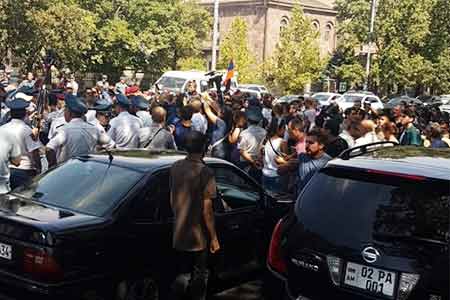 ArmInfo.. On August 20 in the evening, a protest action of green activists started in front of the RA Government against the development of the Amulsar mine. Earlier, protesters marched along the central streets of Yerevan; residents of  the city of Jermuk, who moved towards the capital this afternoon,  also joined them.

The main demand of the protesters is to invalidate the draft EIA  (environmental impact assessment). For over two years now, Jermuk  residents have been closing the approaches to the mine, since the  development of the mine can have an extremely negative effect on the  ecology of Jermuk, which was granted the status of a health resort  city during the Soviet era. In addition, with the positive conclusion  of the EIA, numerous risks were not taken into account, including for  the Kechut reservoir and the Sevan basin.

Ecologist Levon Galstyan emphasized that the fight against the  development of Amulsar has been ongoing since 2012. Earlier, the  Armenian government promised to reconsider its position on Amulsar if  the fears of environmentalists are confirmed by the results of an  international study. By order of the Government of the Republic of  Armenia, the corresponding study was carried out in 2019 by Elard,  which then noted in its conclusion that it is impossible to clearly  answer the question regarding the safe development of the Amulsar  mine with the available documentation. "All the problems raised  earlier by ecologists were confirmed by the study of Elard," Galstyan  said.

The protesters had posters with the following requirements: " As long  as we exist, there are no mines,", "Close the mines - save lives".  Jermuk residents demand a final solution to the problem, noting that  their actions have no political overtones, but their desire is not to  allow the city-resort to turn into a city mine.  They also note that  they will continue their actions to protect Amulsar, including by  blocking the roads leading to the mine by cars. Arman Khachatryan, a  participant in the road trip, also said that the security  organization of Lydian Armenia today tried to use violence against  the citizens who blocked the road to the mine.

The total cost of the Amulsar project is $ 370 million. The life of  the deposit is 10 years and 4 months, with an average annual  production of 200 thousand ounces of gold planned. To note, Lydian  Armenia is a subsidiary of the British offshore Lydian International.  Environmentalists and ordinary citizens are concerned that the  development of the mine may lead to the pollution of the mineral  underground waters of Jermuk and Lake Sevan. In addition to the water  basin, the public is also concerned about the possible presence of  uranium manifestations at the deposit. Environmentalists and  activists demand that the positive conclusion on the EIA project be  invalidated, since it was adopted with legislative violations, and  the document itself contains problems and shortcomings. Earlier, the  European Bank for Reconstruction and Development (EBRD) announced the  completion of its participation in the project for the development of  the Amulsar mine.