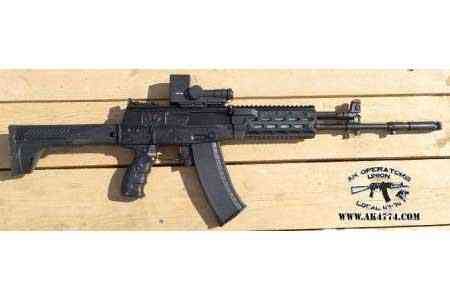 He did not specify the countries he was talking about. Meanwhile,  according to the source, the former head of the concern, Vladimir  Dmitriev, previously reported that the first country to purchase the  AK-12 would be Armenia.

AK-12 is a new platform on the basis of which it is planned to  produce military and civilian weapons of various calibers. AK-12 was  adopted by the Russian army at the end of 2018.

Earlier, ArmInfo reported on the organization in Armenia of an  enterprise for the assembly of AK- 103 assault rifles. The RA Prime  Minister Nikol Pashinyan visited the plant ®n July 7.

The Prime Minister was presented with third-generation optical sights  and domestically produced thermal imaging cameras, which, after  appropriate tests, will be transferred to the arsenal of the Armenian  army within a year.

The head of the enterprise, Igor Gordienko, presented to the prime  minister a model of the industrial zone of the scientific and  production association "Neutron", located in the city of Abovyan,  Kotayk region of the Republic of Armenia. As he said, the zone  consists of four blocks: cartridge production on an area of about 14  thousand square meters with production volumes of up to 150 million  cartridges per year; production of overhaul of automotive equipment  with equity participation of Remdizel JSC and the KAMAZ concern with  a volume of about 120 units per year; production for the repair of  armored vehicles also with the participation of the joint-stock  company "Remdizel" and the concern KAMAZ with a volume of 100 units  per year.

According to the head of the enterprise, at the second and third  stages, it is planned to assemble weapons with a volume of 50  thousand pieces per year. The representative of the plant said that  all equipment for the plant has already been ordered and is at the  production stage, and is being purchased from enterprises with which  the company works on an ongoing basis. It was also reported that it  is planned to open at least 1,200 jobs at the plant, and this only at  the first stage, and with the involvement of narrow specialists, and  the management staff will be staffed with officers with extensive  experience in the field of production and technology. According to  him, two buildings of "Neutron" are at the completion stage, issues  related to the territories are being resolved and by the end of the  year, all work will be completed.

Then the prime minister was told about the mechanical components of  the Osa-AKM air defense missile system, the preparation of training  models for organizing training of military personnel on them. Then,  Pashinyan got acquainted with the assembled AK-103.

The contract for the supply of components for the organization of the  phased assembly of AK-103 assault rifles in Armenia was concluded on  the basis of the corresponding decision of the Federal State Tax  Service of Russia on May 15, 2020. According to the plan, the  production of Kalashnikov AK-103 assault rifles in Armenia started in  the first decade of this year, the production license is calculated  for 10 years. -l-