Russian expert: Power in Belarus turned out to be too simple for a  complex society 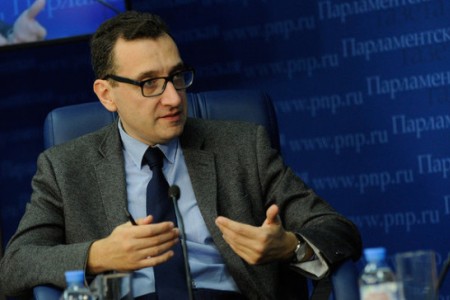 ArmInfo. One should not hastily consider the processes in Belarus in the light of a color revolution - it is rather a protest movement caused by both internal  and external reasons. A similar opinion was expressed by political  scientist, associate professor at the Russian State University for  the Humanities, expert of the Russian International Affairs Council  Alexander Gushchin in an interview with ArmInfo correspondent.

"The first reason for these processes is psychological fatigue from  the 26-year rule of one person. It is clear that this government was  and is rather personalized, to a certain extent, authoritarian in  nature. This is not a totalitarian regime, and it does not permeate  all fields of public life, but it is a personified paternalistic  regime, and the society is to a certain extent tired from the  discourse of communication with it, "the political scientist  believes.

At the same time, the expert believes that this is primarily due to  the fact that generations have changed, and what was good in terms of  communication with society in the 90s, when Lukashenko achieved great  results in the fight against crime, with the preservation of the  state's industrial potential, does not work today. "No matter how  much Lukashenko is criticized now that the system is hardened and  there are contradictions with Russia within the EAEU, this system to  some extent had contributed to social stability, since it provided  employment for the majority of the population of Belarus," the  political scientist noted, adding that most of the Belarusian  factories have a surplus of labor, which is done to maintain social  stability.

At the same time, he added that in parallel with this, new social  strata were formed - the IT sector, the middle urban class - and as a  result, there is a generational conflict. "Under these conditions, it  seems to me that the government to a certain extent ceased to  correspond to the complex social system that had already formed in  Belarus. That is, the government turned out to be too simple for a  more complex society, and could not find these communication points  of contact.

The second point is the belatedness of constitutional reforms,  reforms of centralization and reforms towards collective leadership,  with the formation of party structures that could colonize public  sentiment, each in its own way. Even with the preservation of the  authoritarian leadership, this could have been done earlier,  "Gushchin believes.

The third omission, according to the expert, is foreign policy, since  recently the Belarusian multi-vector line has been replaced by some  tactical maneuvers. "And as a result, foreign policy partners from  both the East and the West were largely dissatisfied with these  maneuvers. We see that both in Russia and in the West, a number of  media outlets and the corporate structures supporting them express a  clear anti- Lukashensko position. Lukashenko promised too much, but  did little and there is no real progress, including in the direction  of the formation of the Union State, including on the roadmaps that  Russia proposed on its own initiative. The combination of these  factors played a role, "the Russian expert considers.

According to him, there is also a tactical factor, and after the  elections, few people believed that Lukashenko won the support of 80%  of voters. "It is another matter that the opposition was premeditated  not to recognize the election results. But the announced result  became a certain trigger and provoked public protests, which we  witnessed. The authorities' excessively harsh reaction to them was  also a provoking factor. There were, of course, provocations on the  part of the opposition, but the fact that excessive force was used  against the protesters played a decisive role, stirring up the  workers, in whom the protest from both social and psychological  fatigue, and protest against these disproportionate harsh measures,  was formed. The combination of these internal and external measures  led to a rather difficult situation faced today by the authorities,  "the political scientist noted, adding that the street is now under  the control of the opposition, and there are more and more people  gathering on it.

At the same time, Gushchin believes that, given the pressure from the  West, it will be quite difficult to keep this difficult situation  under control, despite the fact that the President of Belarus  announced his readiness to hold elections after the Constitutional  reforms, which is unlikely to satisfy the opposition.

The political scientist is also convinced that Russia is doing the  right thing by not taking open steps to intervene in the situation.  He stated that the President of the Russian Federation, in his  conversation with the German Chancellor, also stressed the  inadmissibility of external interference in the internal affairs of  Belarus. "But, external interference from the West, primarily from  Lithuania and Poland, is clearly visible.  It is, of course, veiled  under a social orientation, without obvious anti-Russian sentiments,  but there is a latent desire of certain circles in the future - and  there is this risk, the risk of reformatting the future geopolitical  vector. Of course, this will be done gradually, since color  revolutions do not immediately lead to changes in the foreign policy  vector'' Gushchin emphasized.

In his words, in the same Armenia, for example, one cannot say that  the foreign policy course has changed dramatically, but in general,  there are certain changes both among society and among young people  in relation to Russia. In the long term, public sentiment may change,  since there are many among the audience who are not pro-Russian, and  this concerns, first of all, the middle class, urban youth.

The political scientist sees certain political risks in these  processes. At the same time, he is convinced that today there is no  alternative to national dialogue, but the question arises who will do  this. Gushchin also believes that a lot will depend on whether  Lukashenko's supporters, of whom there are many, certainly not 80%,  but 40-50%, will be able to consolidate. According to him, today they  are seriously losing to the street and the opposition.

"In principle, this is a serious risk for the Union State, and  everything will depend on the further development of the political  situation. And here it is important to what extent external partners,  primarily Russia, Germany and China, will be able to reach a certain  consensus regarding the future of Belarus, in the sense of how they  will build their line on future reforms in Belarus, "he said,  expressing his conviction that other external partners, such as  Lithuania and Poland, play a more destructive role.

At the same time, Gushchin is convinced that after these processes in  Belarus, if Lukashenko remains in power, there is no need to talk  about any multi-vector approach, a lot will depend on whether the  power vertical in the country will be preserved, but he will not have  the former influence. National dialogue in the country will lead, one  way or another, to a change in the political system.

To note, mass opposition protests began throughout Belarus on August  9, after the presidential elections, in which, according to the CEC,  incumbent head of state Alexander Lukashenko won 80.1% of the vote.