View from Moscow: Many in Russia sincerely believe that Armenia is  governed from Soros office, not from Pashinyan`s one 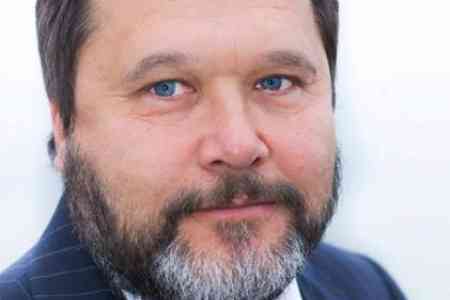 ArmInfo. The picture of  Armenian-Russian relations presented in the context of the current  information wars is very far from their real content. Alexander  Krylov, Chief Researcher at IMEMO RAS, President of the Society of  Caucasian Studies , expressed a similar opinion to ArmInfo.

"Considering the content and especially the titles of various  Armenian and Russian publications, any person unaware of the real  situation gets the impression that the relations between our  countries are very complicated and contradictory. There are enough  critical articles with the same assessments of the Armenian-Russian  relations both in Armenia and in Russia, "he said.

At the same time, the expert emphasized that many of publications  among the articles of this kind are ordered. Neighboring countries  are especially active in ordering publications directed not only  against the Armenian authorities, but also against Armenia as a  state. Such a situation, according to his assessments, leads to an  obvious deficit in the information space of news about the positive  agenda of the Armenian- Russian relations, which is certainly taking  place.  "As a result, many in Russia today quite sincerely believe  that Prime Minister Nikol Pashinyan is leading the country along the  Ukrainian path to NATO, etc. And Armenia is governed not from  Pashinyan's office, but from the office of George Soros. The main  indicators of impulses in bilateral relations are either not voiced  at all, or very little is said. For example, that the Prime Minister  of Armenia is the only leader of the CIS countries who has provided  Russia with real, effective support in the fight against  international terrorism, "Krylov stressed.

The expert considers the sending of Armenian sappers to Syria as an  example of such support against the background of a rather  complicated and confused international context around the situation  in Syria. And in making such a decision, Pashinyan was not afraid to  provoke the discontent of the West, which has recently been acting as  a united front against Russia's anti-terrorist operation in Syria.

"And, of course, Armenia's ability to take real and effective  measures to preserve the interests and even the lives of compatriots  still living in Syria seems to be important. All this was fully  manifested in this decision of the Armenian Prime Minister. I am  convinced that these are real steps and define the real agenda of  real relations between Moscow and Yerevan. Relations that today are,  of course, constructive, "Krylov concluded.