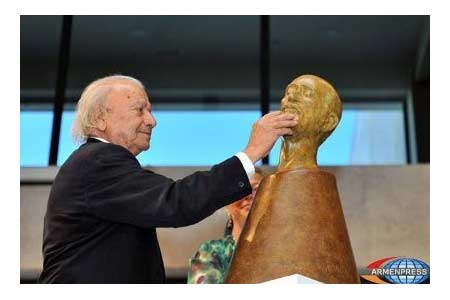 ArmInfo.RA President Armen Sarkissian sent a letter of condolences to the Rastkelenian family on the demise of the Master, awardee of the Movses Khorenatshi Medal and Order of the Legion of Honor of the French Republic Toros Rastkelenian.

As the press service of the  RA President reports, the message of the  President, in particular, reads: "In the person of Toros Rastkelenian  the Armenian nation lost a patriot, distinguished and wise  intellectual who served devotedly his entire life to his people and  the Fatherland.

Throughout this professial work, Toros Rastkelenian through his  sculptures and pieces of art was reflecting consistenly on the  problems of our nation.  Toros Rastkelenian's art has always been  admired in Armenia as his personal contribution to the development  and strengthening of the Armenian-French cultural ties".