Search for Ruben Hayrapetyan was terminated 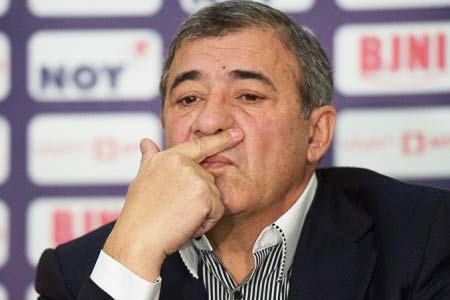 ArmInfo. The search for former head of the Football Federation of Armenia Ruben Hayrapetyan has been erminated. His lawyer Amram Makinyan reports this information.

To recall, Ruben Hayrapetyan and his son Rafik Hayrapetyan are   accused of arbitrariness, deliberate and illegal deprivation of a   person's freedom; on this fact a criminal case was initiated.   According to the IC, the injured party is the former executive   director of the Harsnakar restaurant complex located near Sevan G.Sh.

This complex belongs to the Hayrapetyan family. In the course of the   investigation it turned out that G. Sh.  In August 2015,  took a loan   from the bank in 52 million drams, part of which he sent to the   restaurant itself, and 30 million drams, without the knowledge of the   owners of the restaurant, used to open his own taxi service. Upon  learning of this, the father and son of Hayrapetyan with a group of   people illegally deprived him of his freedom in one of the cottages   near Yerevan, where he was periodically subjected to physical   violence. Further, under pressure, G. Sh. and his relatives and   friends, cars, jewelry were taken in payment of the debt, in parts -   about $ 40 thousand. In addition, in October 2016, the Hayrapetyans   took over the apartment of G.Sh.

Investigative and other procedural actions are carried out to ensure   a complete, objective and comprehensive investigation. Ruben   Hayrapetyan previously reported that he is in Moscow for treatment,   but cannot return due to the situation with the coronavirus. He was   offered to use, with the assistance of the Armenian Embassy in  Russia, the next flight Moscow-Yerevan, but Hayrapetyan never left   the territory of Russia.