Aram A: Genocide continues with the same performer, but the world is  silent 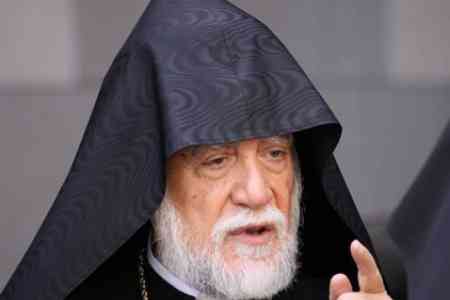 ArmInfo.The Catholicos of the Great House of Cilicia, Aram A, touched on the decision to turn the Hagia Sophia in Istanbul into a mosque. Aram A wrote about this on his page on the social network Facebook.

The Catholicos of the Great House of Cilicia, in particular, noted:  <Recently, we learned that the Turkish court gave the green light to  the possibility of turning the Greek Cathedral of St. Sophia of  Constantinople into a mosque.

This temple, built in 537, is considered the pinnacle of Byzantine  architecture. After the Byzantine Empire was conquered by the  Ottomans, the cathedral was turned into a mosque in 1453, and then in  1935, it was transformed into a museum.

In recent days, church leaders, as well as the international  community, have urged Turkey not to turn Hagia Sophia into a mosque  and maintain its current status. Representatives of the  Armenian-foreign press wanted to know our point of view on this  issue>, Aram A. emphasized.

At the same time, he noticed that he would like to make a number of  accents. <Firstly, at the current initiative of its president, Turkey  actually continues to encroach on cultural and spiritual values,  ignore the principles established by international law, and falsify  history.  Secondly, abandoning its internal and external interests,  as well as its geopolitical goals, Turkey even ignores the  instructions of its old and new friends.

Thirdly, by this decision, Turkey deliberately strikes at the  foundations of Christian-Islamic mutual respect and trust at the  local, regional and international levels.

Fifth, where were the leaders of the Western world, in the political  or spiritual sense, when after the Armenian Genocide thousands of  churches belonging to the Armenian people were turned into stables,  cafes, mosques, <other public places>?