President of Armenia once again opposed the new property tax: it only  seems that any law is just arithmetic, but human lives are behind  this arithmetic 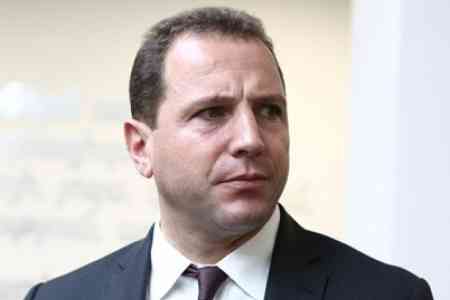 ArmInfo.The constitution,  constitutionality, statehood are not just legal formulations on  paper, the next step is very important - their implementation. As the  Armenian President's press service told ArmInfo, Armenian President  Armen Sarkissian stated this at a meeting with a group of members of  the Professional Commission on Constitutional Reforms.

At the same time, he stated that laws can often be submitted for  signature, which have no problems in terms of their compliance with  the Constitution, but they are untimely.

As a clear example, the President of Armenia touched upon the law on  property tax. Noting that tax legislation is sensitive in itself, the  President of Armenia, touching upon the issue of recent changes  regarding property tax, stressed that any tax law should be  thoroughly discussed and analyzed.  <There is no doubt that the state  should think over and develop tax legislation, and people who have  more wealth should pay more taxes. In all countries, taxes rise or  fall. However, laws also have a social, psychological impact.  Property tax also speaks of many other problems. For example, if an  associate professor living in the center of Yerevan inherited his  apartment from his famous academic grandfather, what should he do in  this case, sell it and move to the outskirts of the city? It is  possible that he will sell the apartment and leave the country,  taking with him the academic archives and history, in general, part  of the history of Yerevan and our people, "the head of state noted.

At the same time, he added that it only seems that any law is just  arithmetic, but behind this arithmetic there are human lives, our  country, culture, our city. <One must be very careful. The highest  value for us should be a person who also creates a culture and  environment. This law is on my table. I can't send it to the  Constitutional Court because there are no problems with  constitutionality. All I have to do is sign the law and attach a  statement. I did just that, explaining in detail what the problems  were. If I had the right to send the law back to the National  Assembly, I would do it, noting that for these reasons the law should  be amended. And I would veto this law if I had such an opportunity>,  the Armenian President summed up. To recall, the RA National Assembly  at an extraordinary meeting on June 25 in the second and final  reading introduced amendments to the Tax Code of the country. As the  Deputy Minister of Finance of Armenia Arman Poghosyan noted in his  speech, the bill provides for the application of new mechanisms for  calculating property tax based on its market rather than cadastral  price.