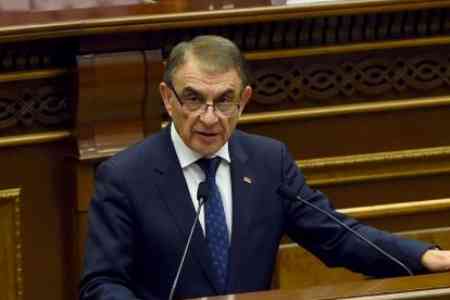 ArmInfo. On July 9, during the  court hearing, the defense side submitted a motion to stop the  criminal prosecution of former Speaker of the National Assembly of  the Republic of Armenia, Ara Babloyan.

As lawyer Aram Vardevanyan noted in particular, there was obvious  violations in the prosecution of his client, and after the  requalification of the charge, investigative measures were not taken,  however, the case with the indictment was sent to court. For their  part, prosecutors objected that the court could not assess the change  in the charges until the relevant evidence was examined in court.   The decision will be announced today.

Earlier, the Special Investigation Service reported that there is  evidence that in March 2018, in the process of Gagik Harutyunyan's  resignation of the powers of the President of the Constitutional  Court, officials, based on group interests, personally and also  through non-officials committed official forgery, to appoint Hrayr  Tovmasyan to the post of head of the Constitutional Court.