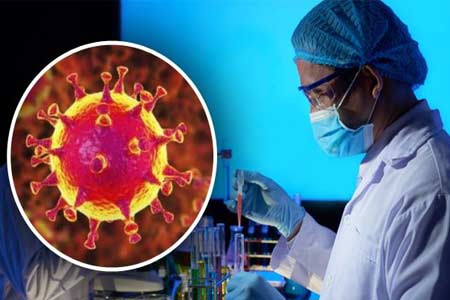 ArmInfo.The Institute of  Molecular Biology of the National Academy of Sciences of Armenia is  awaiting the decision of the Ministry of Health of the Republic to  organize the production of tests for COVID-19. Director of the  Institute Arsen Arakelyan stated this at a press conference in  Yerevan on July 1.

According to him, at the first stage the institute will be able to  produce 2 thousand tests with the possibility of increasing these  volumes. In total, the institute is capable of producing up to  100-120 thousand tests per year. Currently, about 6 thousand tests  are stored, which, if the Ministry of Health approves, will be  brought to the market at a price of $ 2.5 per test. Moreover, as  noted by Arsen Torosyan, the accuracy of the Armenian test samples is  98% compared to foreign counterparts. In its activities, the  Institute cooperates with a number of European and Chinese  universities. As regards export opportunities, Arsen Arakelyan  emphasized that now such an opportunity is not considered, since it  is associated with a long process of product certification. The  director also noted that the institute, in cooperation with the  Yerevan Institute of Physics, developed and produced the first  samples of masks, which are distinguished by additional protective  properties. Work is also underway on the development of drugs.  However, there are two problems in this issue - the lack of financial  resources and material and technical means. The institute has no  problems with human resources, said Arsen Arakelyan.

To recall, at the end of May Arsen Arakelyan reported that the  Institute of Molecular Biology of the NAS of Armenia is ready to  produce 1-2 thousand tests for COVID-19 daily. "We have received all  the necessary materials for the preparation of 100 thousand tests,  tests are being carried out now. The tests are very sensitive and the  virus can be detected even with a relatively low titer  (concentration) of the virus," Arakelyan noted, adding that after the  test period it is planned to produce about 1-2 thousand tests. The  Director of the Institute emphasized that the work is carried out  jointly with the Ministry of Health and the National Center for  Disease Control and Prevention. "We take the tests they made, and  repeat them to compare the accuracy of our tests. During this week or  early next, the tests will already be submitted to the Ministry for  testing," he said. Currently, samples are already being produced from  the purchased reagents, the tests of which will be carried out in  several stages. The production of tests on the spot will save money  allocated by the state for their acquisition abroad. Samples taken  from a person are checked for the presence of coronavirus in  diagnostic laboratories. The procedure is based on the so-called  polymerase chain reaction (PCR), often used in areas such as  forensics or genetics.  It should be noted that over the last 24  hors, 523 new cases of COVID-19 were recorded in Armenia, 515 people  recovered. During this period, 10 people  were died from  coronavirus  - 6 men and 4 women aged 62 to 76 years. Altogether, since the  beginning of the pandemic, 26065 cases of morbidity have been  confirmed, 10,900 people have received  treatment, 14,563 patients  have recovered. At the same time, the total number of deaths amounted  to 453 cases.