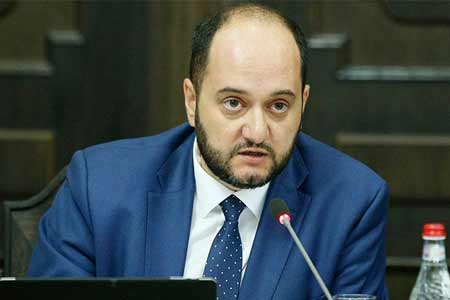 ArmInfo. The Minister of Education, Science, Culture and Sports of the Republic of Armenia, Araik Harutyunyan, clarified some of the provisions of the Lanzarote  Convention.

During a live broadcast on Facebook, the Minister informed that 49 of  the 50 articles of the Convention are aimed at combating pedophilia  and protecting children from a criminal phenomenon. Only one article  - the 6th - deals with the field of education, and many, as was  noted, intentionally or out of ignorance, distort its meaning.  Harutyunyan noted that all statements about the new methodology and  sexuality education textbooks allegedly being developed for Armenian  schools are false. According to the article, each party to the  Convention must take the necessary legislative or other measures to  ensure that children receive information about the risks of sexual  exploitation, violence and necessary means of self-defense during  primary and secondary education. This information, provided in  collaboration with parents, should also cover the risks that arise in  situations involving the use of telecommunication technologies.  Therefore, the parents themselves should be directly involved in this  process.

Among the risks that children should be informed about are, for  example, the potential danger of communicating with a stranger who  offers to go with him to a certain place. In addition, the risks are  contained in the communication of children on social networks, as  well as due to receiving suspicious calls and messages on a mobile  number. Harutyunyan noted that raising the level of students'  awareness of these risks is also aimed at understanding the  importance of reporting these dubious incidents to parents and  teachers.

The Minister also emphasized that the above information, according to  the Convention, should be provided in accordance with their age.

The CE Convention was adopted on October 25, 2007, and entered into  force on July 1, 2010. It is signed by 47 countries and has entered  into force in 45 states. The Republic of Armenia signed the  Convention on September 29, 2010, the parliament approved in May of  this year, and the president signed at the end of last week. The  Convention, setting common standards and definitions applicable in  all European countries, is designed to protect children from sexual  exploitation and use. The objectives of the convention are the  prevention and combating of sexual exploitation of children and  sexual violence, the protection of the rights of children affected by  sexual crimes, and the promotion of domestic and international  cooperation in combating sexual exploitation and sexual violence  against children. By ratifying this Convention, the Republic of  Armenia undertakes to take the necessary legislative or other  measures to prevent all forms of sexual exploitation and use of  children, as well as protect children, including the development and  implementation of appropriate mechanisms, especially in the fields of  education, health care, social services, as well as in law  enforcement and judicial authorities. Cooperation between the States  Parties to the Convention will be carried out with the aim of  preventing and combating the sexual exploitation and abuse of  children, protecting and assisting victims of violence, conducting  investigations and proceedings provided for in the Convention. Thus,  ratification of the Convention will create an opportunity to  introduce relevant legislative amendments to the Republic of Armenia  aimed at combating the sexual exploitation of children and sexual  violence, protecting the rights of children affected by sexual  exploitation and sexual abuse. Moreover, the ratification of the  Convention will promote priority attention to ensuring the best  interests of the child in all actions regarding children, and  stimulate international cooperation between the parties to the  Convention.