Vahagn Hovakimyan: We propose to give parliament the opportunity to  cancel the decision on holding a referendum under emergency  conditions 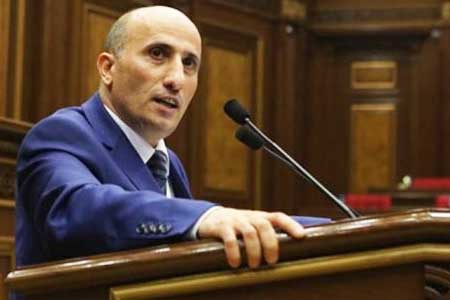 ArmInfo.In cases of emergency or martial law in the country, according to the Constitution, a referendum must take place after the emergency or war is eliminated  no earlier than 50 days and no later than 65 days. Vahagn Hovakimyan,  a lawmaker from the My Step faction, stated this during the  presentation of the draft law "On Amending the Constitutional Law on  Referendum".

The lawmaker noted that everything was ready for the referendum,  however, the state of emergency was announced and the referendum  could not be held. <At the same time, it is unclear how events will  develop further. It's unclear what will happen to the <Yes> and <No>  campaign headquarters, the commissions, etc.  We discussed the  current situation with representatives of the government and the CEC.  Thus, it is proposed that the National Assembly will be able to  cancel the decision adopted by Parliament on holding a referendum. I  would like to emphasize that a parliament can make such a decision  only in a state of emergency or martial law. If the parliament  doesn't make such a decision, then the resumption of the referendum  process will begin>, Hovakimyan said.

He emphasized that such measures are simply necessary. <The fact is  that if the heads or members of the commissions are appointed, then  they are exempted from draft and mobilization. And in conditions of  martial law, these members of the commission will not be called up,  even if they themselves want to be mobilized. This question concerns  our security>, the MP said.

Hovakimyan noted that the main goal of the abolition of the  referendum is to preserve the health of citizens. <We fear the  coronavirus pandemic. The virus spreads not only in Armenia, it is  everywhere. We do not intend to endanger the health of our citizens,  for us the most important thing is to protect the health of our  citizens>, the lawmaker concluded. MP from Prosperous Armenia faction  Naira Zohrabyan criticized Hovakimyan. <The solution proposed by you  is just a spit on the Constitution. To solve your short-term problems  you are making serious changes. Perhaps tomorrow you decide to cancel  the parliamentary elections or declare Armenia a presidential  country. The referendum institution is clearly defined in the  Constitution. I don't see the need for this initiative>, Zohrabyan  emphasized.

It should be noted that on February 6 the National Assembly of the  Republic of Armenia adopted a decision on submitting draft amendments  to the Constitution to the referendum. 88 lawmakers voted for this  decision, 15 against. It is a question of introducing amendments to  Article 213 of the Constitution, providing for the dissolution of the  Constitutional Court. A referendum on constitutional amendments was  scheduled for April 5 this year. However, because of the coronavirus  epidemic, it had to be canceled.