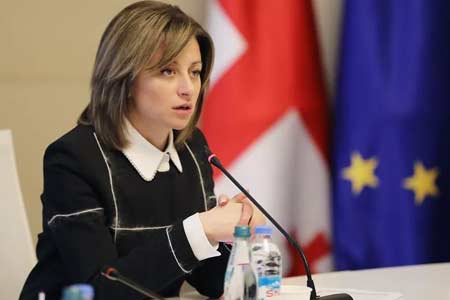 ArmInfo.The diplomatic scandal between Armenia and Georgia in connection with the statements of the head of the Armenian Ministry of Health Arsen Torosyan continues to  gain new momentum.

The Minister for Displaced Persons, Labor, Health and Social Affairs  of Georgia, Yekaterina Tikaradze, responded to Torosyan's statements,  who called such statements groundless.

"The statements of the Minister of Health of Armenia Armen Torosyan  are unfounded and raise a number of questions. The statement of my  Armenian colleague is devoid of any arguments," Tikaradze, adding  that he plans to contact his Armenian counterpart on this issue.

"We had several telephone conversations at the time the epidemic  started, and we consulted and compared the situation in our  countries. If he had any questions, he could use this method of  communication and we would answer these questions. There are some  doubts and questions about what such a statement of my colleague is  based on. We plan to contact him to find out more, "E. Tikaradze  said.

As ArmInfo previously reported, referring to the pandemic situation  in Armenia and Georgia, Torosyan stated that the anti-epidemiological  system and healthcare in Georgia is different from the Armenian one,  and not from the best side. "The Georgian healthcare and  anti-epidemiological systems are significantly different from the  Armenian, and not in a good way. Our anti-epidemiological system is  stronger, and this is a fact," he said. The head of the Ministry of  Health of Armenia believes that the small number of infections and  deaths among patients with coronavirus in Georgia can be explained by  shortcomings in terms of the methodology and quality of tests carried  out in a neighboring country. He also added that among citizens who  came from Georgia to Armenia, and in particular, among the truck  drivers, many cases of COVID-19 infection were detected.

These reports were followed by an acute reaction from the medical  establishment of Georgia. Senior health officials assured that the  country's coronavirus statistics are completely transparent.

Georgian Foreign Minister David Zalkaliani also spoke in fact, who  said that through diplomatic channels the Georgian side demanded  clarifications from the relevant government departments of Armenia.  "Of course, to put it mildly, this was very incorrect in relation to  a neighboring and friendly country, including from officials, from  such high officials as the Minister of Health," the minister said.

Zalkaliani said that the Ministry of Health of Armenia passed its  position through the Georgian Embassy in Yerevan and, on behalf of  the Minister of Health, expressed regret that his statement, which  was "incorrectly interpreted, upset Georgian colleagues". The Foreign  Minister also recalled that Georgia's efforts in the fight against  COVID-19 are highly appreciated by international partners, including  the World Health Organization. "I want to believe that this was a  misinterpretation of the media and this concern expressed by the  Minister of Health of Armenia in a recent call to the embassy is  sincere," Zalkaliani summed up.