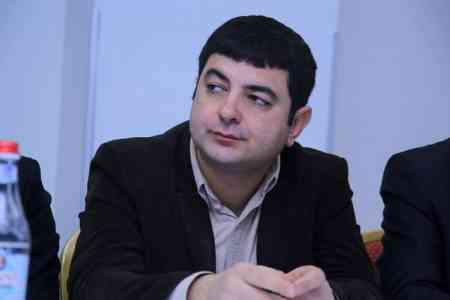 ArmInfo.The current political situation in Armenia can be described as a vacuum of the opposition amid slow, but steady decline in the rating of revolutionary authorities.

The remnants of the completely discredited regime can not be considered as the opposition, by any stretch of imagination, while the rating of power in the coronavirus realities, apparently, will continue to fall. In such circumstances, in December 2023, the Armenian voter will face a lingering dilemma like “If not Nikol then whom to elect,” or “No matter whom we elect, nothing will change”. The only way to avoid the lack of election choice seems establishment of at least one qualitatively new political force in Armenia. Especially considering that the domestic political situation has matured for that as never before.

Let's start our analysis of the situation with the reasons for the opposition vacuum. The roots of such a vacuum lie in “chess” past of Armenia, when in 2008 the immediate circle of Serzh Sargsyan, who was elected under rather doubtful conditions, laid the foundations of the so-called "systemic opposition." “Prosperous Armenia”, “Orinats Yerkir” and the ARF have quite successfully played this role for the next 5 years, in fact being a pocket appendage of the RPA and personally Serzh Sargsyan. We can clearly see today the results of this game - OY and ARF have almost disappeared from the political field, and the role of the PA is to defend the safety of Gagik Tsarukyan’s money bag. The second parliamentary force, which is now in opposition to the ruling majority - the Bright Armenia party - has also become an involuntary victim of the implacable chess-republican past. It seems that the forced fist fights and swearing performed by Edmon Marukyan will obviously do him and his party a bad turn in the next election. Especially if this is facilitated by the stem of financial flows through which the "brights" are financed.

The non-parliamentary opposition is not in good shape either: the remnants of the RPA, the array of its former satellite parties and even Zhirair Sefilyan's Sasna Tsrer, Levon Ter-Petrosyan's ANC and Raffi Hovhannisyan's Heritage. Thus, it seems that Serzh Sargsyan himself put the last nail into the coffin of his own political prospects, simultaneously destroying the last chance of Robert Kocharian’s political reincarnation. He did this in a rather original way, creating a pocket opposition and finally destroying in Armenia the last rudiments of what is called a political field in civilized countries. However, already today the pocket opposition, even its updated-bright version, has completely discredited itself. The election prospects of the “chekist” party, which is already being created by former National Security Service director Artur Vanetsyan, are also doubtful. Dilution of the “chekist'' ranks with a republican-comprador cocktail is unlikely to add parliamentary prospects to Vanetsyan’s party.

In the spring of 2018, Nikol Pashinyan and his immediate circle were very well aware of the whole depth of the inconsolability of the situation. They realized and walked, assuming the power, which was literally hanging on police batons for one month. However, today it is already obvious that after the decline in post-revolutionary euphoria, it’s becoming increasingly difficult for Pashinyan and the “stepping” government and parliament to retain by half-measures their rating, richly flavored with populism. And it is quite unclear with what rating My Step will start the election campaign in 2023. The main reasons for the fall in the power rating are obvious- the failure to fulfill a certain part of their own promises and, accordingly, voters’ expectations. The reform of the judicial system, the fundamental reform of the economy, law enforcement agencies and all fields of public life are among the rational promises and expectations. While the eradication of the “red lines” and radars along with establishment of general prosperity and well-being are just part of obscure promises and expectations of the ordinary citizens.

Paradoxically, but in conditions of such domestic political instability, the ordinary Armenian voter is quite capable of breaking bads, having brought even “former” people to the parliament of the convocation of 2023. The latter can appear in the person of the Vanetsyan Chekists, Republicans, RPA satellite parties, “brights” and “prosperous” and even Dashnaks. In case the worst possible scenario, “My Step” will lose its monopoly in parliament. The best of the pessimistic scenarios will end with the election of several RPA satellite parties to the parliament, which, if united, will overwhelm all attempts at reform - that is, government initiatives directed against them. In the first case, we will return to the recent past with all its dubious charms. In the second, we will get an even more ineffective power, incapable of independently implementing any of its own initiative.

The representatives of former authorities of all stripes have been working towards achieving such a scenario for two years already, using all the means and mechanisms at their disposal. This is, above all, finance. Everything else: the media, propaganda, slander, insinuations, falsifications, lies, black PR, even recent fists and undermining the foundations of the state – are the consequence. And the threat of their return to power by the end of 2023, no matter in what form, is growing and growing quite consistently. At the same time, the threat of “swamping” of the incumbent government is growing, and, unfortunately, similar trends are observed. There are a lot of internal and external reasons for this, which are a topic of a separate extensive study.

In such conditions and prospects, the political field of Armenia needs fresh blood more than ever - the creation of new political forces in the literal sense of the word. At least one political force that does not have even a gram of affiliation either with former or incumbent authorities. A political force with the participation of public figures, military, diplomats, programmers, political scientists, analysts, journalists, techies, farmers, doctors. Why not, businessmen and bankers. A political force capable of speaking with any group of voters in its language. A party that does not have any funding other than self-financing. A party that is able to demonstrate to voters the sources of this funding, even though the law on parties exists only on paper. And, finally, most importantly – a party that is able to present a clear program of its own vision of the further socio-economic, political and foreign policy development of Armenia. As well as a human resource capable of implementing these programs in all the sectors. It can be noted with confidence that such people with such skills, clean hands and unspotted past fortunately, still exist in our country. It is such a party that will be able to conclude an unvoiced social pact with the electorate.

Previously such an attempt was made by the predecessor of “Sasna Tsrer”, “Founding Parliament”, which, unfortunately, did not succeed. Today, lawmaker Arman Babajanyan, the Social Democratic Party “Citizen’s Decision”, and a number of other forces are trying to do this. However, not one of them meets the criteria allowing real competition with the “My Step” bloc, and most importantly, preventing the reincarnation of compradors. Meanwhile, the emergence of such a political force comes even from the interests of the current government. The reasons for that are an extensive topic of a separate political technological analysis. In this article I should only note that the emergence of such a trustworthy force will be the last nail in the coffin of the political facade of the remnants of the comprador regime. The representatives of former authorities will no longer be able to fight on two fronts: with Pashinyan and with a political force of a similar quality.

Meanwhile, for Nikol Pashinyan, the new party can become a constructive critic and opponent. A force that will breathe down the authorities' neck, but not hit them in the back. It will criticize the authorities, but not work for external forces. And most importantly, subject to all the above criteria, the appearance of a new party will not only fill the opposition vacuum in the political field, it will lay the foundations of political culture in Armenia. Within the framework of this culture, mutual control, power will pass from party to party, preventing either one or the other from relaxing. Ideally, following the example of British Labor and Conservatives or American Democrats and Republicans. Maybe this sounds too idealistic, the path ahead is long and difficult, but it is nevertheless necessary to start it. And the current situation - 3.5 years before the next election, seems to be extremely optimal for starting this path.