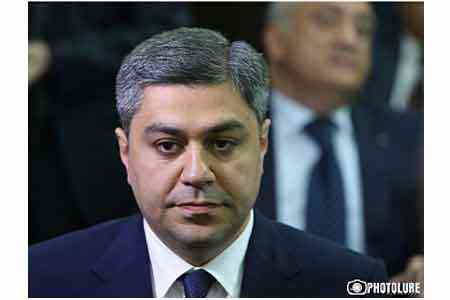 ArmInfo.Former NSS  chief Arthur Vanetsyan denies involvement and interest in Zangezur's activities Copper-Molybdenum Plant (ZCMC). He wrote about this in his Facebook page, where he also accused Prime Minister Pashinyan  the creation of  a "deep crisis of governance" by the country and the monipulation of  the Karabakh peace process.

However, Vanetsyan did not deny the direct involvement of his father  in the work of ZMMK, where he runs an ore transporting company. <As  for my involvement in the Zangezur Copper-Molybdenum Combine, this is  yet another attempt to denigrate my family. There is no legal basis.  My father's freight company has been working with this plant since  2014>, Vanetsyan emphasized, noting that he was not personally  interested in this plant and the Prime Minister knows this best of  all.

It should be noted that the press secretary of the Prime Minister of  Armenia, Nikol Pashinyan, Mane Gevorgyan, said on the eve that the  son-in-law of the third president of Armenia, the former Armenian  ambassador to the Vatican, Mikael Minasyan, under the cover of fake  owners, had shares in a number of large enterprises of Armenia,  including LLC " SPAYKA "," Zangezur Copper-Molybdenum Combine ","  Yerevan-Mall "," Shant "shopping center," Armenia "shopping center,  etc. The Armenian public was well aware of this without Gevorgyan.

As Gevorgyan also reported, "Most of these shares after the  revolution of 2018 were hastily sold. For example, a share in the  Zangezur Copper-Molybdenum Combine, abusing its authority and with  the help of dummy shareholders, was sold to the former head of the  National Security Council of the Republic of Armenia, Arthur  Vanetsyan, whose father's company became a major cargo carrier of  ZCMC. "One gets the impression that the key persons of the corruption  system of Mikayel Minasyan, being potential accused, left Armenia,  which became a significant obstacle to the investigation of  corruption actions of Minasyan.  The Prime Minister expects that,  despite all the difficulties, the law enforcement bodies of Armenia  will be able to conduct an investigation at an appropriate level and  give reliable answers to the people of Armenia>, the spokeswoman  noted.

Recall that Mikael Minasyan was prosecuted as a defendant in a  criminal case on illicit enrichment, money laundering and the  inclusion of false data in the income statement. There is no exact  information regarding his current location. Minasyan himself  previously via Facebook reported the initiation of more than 10  criminal cases against people related to him and his family. Last  fall, Prime Minister Nikol Pashinyan called on Minasyan to return to  his homeland and answer questions from the Special Investigation  Service.  Recall that back in January of this year, the Prime  Minister of Armenia Nikol Pashinyan ordered to check the media  information that among the shareholders of the country's largest  mining enterprise - Zangezur Copper-Molybdenum Plant (ZMMK) - there  are people affiliated with senior officials of the former political  mode.

However, some experts, after checking the information, found it  incomplete and not transparent, since the structure of minority  shareholders is completely incomprehensible. The press passed  information about the presence of interests in it on the part of the  family members of the late President of Armenia Serzh Sargsyan who  resigned after the "velvet revolution". A number of parliamentarians  of Armenia appealed to the relevant authorities with a demand to  begin an investigation into the fact that rather "modest" persons  close to the family and especially to the son-in-law of the former  president began to own the company's multi-million dollar assets.