Judge in the case of Robert Kocharyan returned to work 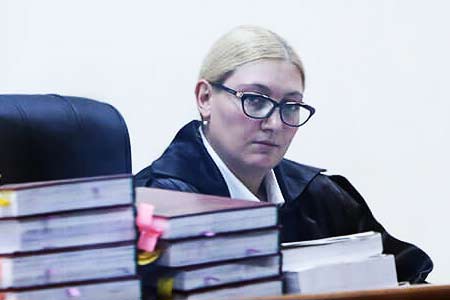 ArmInfo.Today on April 17, the judge in the case of the second president of Armenia Robert Kocharyan - Anna Danibekyan, went to work. This was reported by the apparatus of the court of general jurisdiction of the city of Yerevan.

To recall, on March 13 Danibekyan presented a document on temporary  disability due to health reasons, which expired on April 16.  Meanwhile, the team of Kocharyan's lawyers repeatedly expressed their  dissatisfaction with the fact that for this reason a court session  was not held on March 17 at which a motion was to be submitted to  change the preventive measure of the former president from arrest to  personal surety. On this issue, the defense side appealed to the  Ombudsman and the High Judicial Council, since no other judge was  appointed to consider the application. Claims were also filed  demanding the suppression of the inhuman treatment against Kocharyan.  We add that these claims are due to the fact that the former  president is at risk for the spread of coronavirus, as he is an  elderly person and has health problems.  Robert Kocharyan is being  accused in the March 1, 2008 case. The charges were brought under  Article 300.1 of the RA Criminal Code (Overthrow of the  Constitutional System).