Analyst: Revolution in Karabakh   threatens with another escalation  of conflict 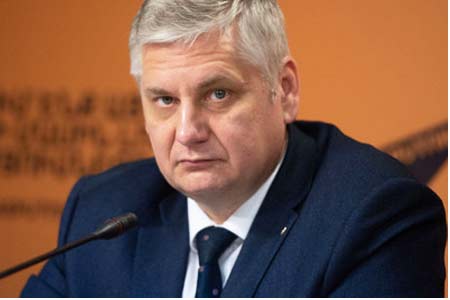 ArmInfo. Having questioned the holding of the second round of the presidential election in Nagorno-Karabakh, one of the candidates, Masis Mayilyan, turned into  a key figure in the election campaign. Such an  opinion was expressed  to ArmInfo,  by leading researcher of  the Center for Euro-Atlantic  Security of the Institute for International Studies at MGIMO (Moscow  State University of International Relations) , Sergey Markedonov.

As a result of the presidential elections held in Artsakh on March  31, not one of the candidates won 50% of the vote. With the most  votes in the first round, Araik Harutyunyan - 49.6% and Masis  Mayilyan - 26.7% will have a second round. However, on April 5, Masis  Mayilyan called on the Artsakh people to boycott the second round,  making it impossible to carry out the threat of the spread of the  coronavirus.

At the same time, the growing danger of coronavirus, with all its  importance, is  far from being the only motivation  of Mayilyan,  given that, according to his estimates,March 31 elections are far  from those electoral processes that expected by the Artsakh society  in the new conditions. Dissatisfaction with the move campaign, its  results are indicated by opposition politicians, public  organizations, voters. A protest rally was held in Stepanakert  demanding the resignation of the current NKR authorities and the  annulment of the election results, "he said.

At the same time, Markedonov is not at all sure that all 26.4% of  Mayilyan's supporters will not go to vote in the second round. Thus,  it can take place, after which disputes and contradictions will  concentrate around the appearance. Moreover, even if the elections do  not take place, this will lead to an extension of Bako Sahakyan's  team's stay in power, which, in his opinion, is certainly not the  goal of his many critics.  It is here, according to analysts, that  the opposition can resort to "revolutionary expediency." However,  unlike Armenia itself, in Nagorno-Karabakh the possibility of a  boycott and revision of the election results through street protests  arises for the first time. Moreover, the possibility of escalation of  the situation on the contact line remains. Thus, domestic political  destabilization is fraught with an external threat for Karabakh,  which limits both the radicalism of the opponents of the government  and the latter's ability to take tough actions against the  opposition.

"The future of President Mayilian also raises questions, if for him,  of course, everything will turn out well in the conditions when the  majority in the parliament is already behind Harutyunyan. It's  worthwhile to note the skillful combination of the leader of the"  velvet revolution "in Armenia Nikol Pashinyan with protest rhetoric  and behind-the-scenes agreements by the Republicans, the Armenian  Prime Minister is well aware of the degree of danger of the risks of  internal destabilization, which is why, due to the risks of the  coronavirus, he postponed even his own conflict with the  Constitutional oud and it seems that now is the time to learn these  truths and the people of Karabakh ", -. Markedonov concluded.