Until the end of spring, Russia will send 3065 test kits for  laboratory diagnostics to the CIS countries 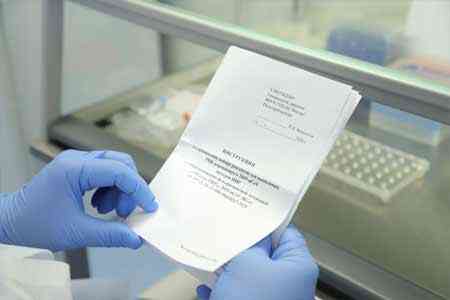 ArmInfo.Until the end of spring, Russia will send 3065 test kits for laboratory diagnostics to the CIS countries, each of which allows you to do up to 100 tests for  coronavirus, a source close to the operational headquarters told RBC  and confirmed a source close to the Russian Foreign Ministry.

The representative of the Embassy of Uzbekistan in Moscow confirmed  to RBC that Russia had indeed sent assistance to the republic, but  refused to give the number of sent test kits. Earlier,  representatives of the Ministry of Health of Uzbekistan reported that  about 9 thousand tests would be received from Russia.  The  information that Russia sent assistance to combat the coronavirus,  RBC was confirmed by the representative of the Armenian Embassy.  "Armenia sent a request through the Ministry of Health, and Russia  provided the necessary number of test systems for laboratory  diagnosis of coronavirus free of charge," he said and added that  bilateral cooperation in this area continues.

Earlier, Kommersant, citing sources, said that the CIS countries, in  particular Belarus, requested assistance from Russia in the fight  against coronavirus. So far, test kits have not been sent to Belarus  - only protective masks, one of RBC's interlocutors noted. In total,  according to him, Minsk requested 10 thousand tests. "This is no more  than others," he added.

Of the CIS countries (with the exception of Russia, where 3548 cases  of the disease were recorded on April 2), the most serious situation  is in Armenia, where 770 cases of the disease and seven deaths were  confirmed. In the third and fourth places - Moldova, where 591 cases  and six victims, and Kazakhstan - 464 cases of infection, three ended  in death. 443 cases confirmed in Azerbaijan, five people died. In  Belarus, 351 people became infected, four died. In Uzbekistan,  according to official figures, 227 cases of coronavirus infection  were registered, two died. In Kyrgyzstan, 130 cases are known; in  Tajikistan, no cases of infection have yet been identified.