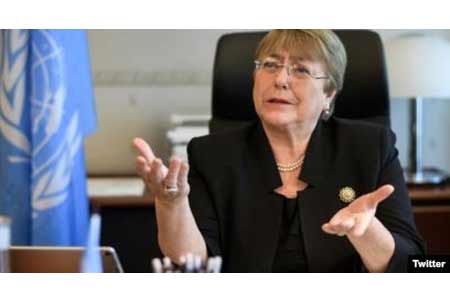 According to France 24, the Commissioner noted that state authorities  should explore ways to release those who are particularly vulnerable  to COVID-19, including elderly prisoners and patients, as well as  low-risk offenders. Bachelet emphasized that places of detention in  many countries are crowded and often lack adequate hygiene and health  conditions. According to her, physical distance and self-isolation in  such conditions are almost impossible. She called on governments not  to forget about people in custody or those in places such as closed  psychiatric institutions, nursing homes and orphanages.

Recall that on the eve of the General Prosecutor's Office of Armenia  decided to release prisoners with chronic diseases at risk from the  pre-trial detention center. As Advisor to the Prosecutor General of  Armenia Gor Abrahamyan said on his Facebook page, in connection with  the coronavirus epidemic, the preventive measure against 20 prisoners  will be changed. According to Abrahamyan, the territorial bodies of  the prosecutor’s office have identified criminal cases at the  preliminary and judicial stages, the persons involved in which are at  risk of contracting coronavirus. These individuals revealed chronic  diseases. An alternative preventive measure will be applied to them.   “Prosecutors will make appropriate requests in order of priority. 11  people will be released from the prison institution “Hospital of  Convicts”, another 9 - from other penitentiary institutions,  ”Abrahamyan emphasized. He also noted that 2 people under pre-trial  detention have already been released. “As a preventive measure  against the latter, a recognizance not to leave was chosen. The  process continues, ”he wrote.

Note that according to the World Health Organization (WHO), on the  evening of April 3, the number of people infected with the new  coronavirus in the world exceeded 972.3 thousand. According to  current data from Johns Hopkins University, over 1.1 million people  have already become infected in the world, more than 226.6 thousand  have recovered. The leader in the number of confirmed cases,  according to Johns Hopkins University, remains the United States  (277.7 thousand). Italy is in second place (119.8 thousand), Spain -  in third (119.1 thousand), Germany (91.1 thousand) - in fourth.   China, where the pandemic began, fell back to fifth in the number of  cases of infection (82.5 thousand; 76.9 thousand people have already  recovered).