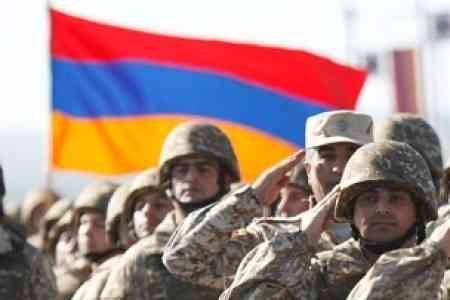 ArmInfo. In Armenia, they recall the victims of the April 2016 war. Four years ago, on the night of April 2, the Azerbaijani armed forces carried out  large-scale military aggression against Nagorno-Karabakh.

In this regard, early in the morning, the Prime Minister of Armenia  Nikol Pashinyan, accompanied by the Minister of Defense David  Tonoyan, visited the Yerablur military pantheon, where they laid  flowers at the graves of heroically dead Armenian soldiers and paid  tribute to the memory of those who gave their lives for the defense  of the Motherland.

The Armenian Prime Minister also laid flowers at the graves of  military commander Andranik Ozanyan and the sparapet Vazgen Manukyan,  and at the memorial complex that perpetuated the memory of the dead  azamartiks (warriors of the liberators).

Note that due to the threat of the spread of the coronavirus,  Armenian high-ranking delegations individually made campaigns in  "Yerablur".

Armenian President Armen Sargsyan paid tribute to the memory of the  victims of the April war. The President was accompanied by former  conscript soldiers, his staff Gor Darmanyan and Liparit Melkonyan, as  well as an Emergencies Ministry employee Arkady Andreasyan. They  distinguished themselves during the service with high combat training  and were injured during the fighting.

Recall that on the night of April 2, 2016, the armed forces of  Azerbaijan carried out large-scale military aggression against  Artsakh. The war was accompanied by war crimes, gross violations of  the laws and customs of war, as well as international humanitarian  law.

April military operations became the largest after the ceasefire  agreement of May 1994. During the fighting from April 2 to 5, all  Armenian military units, including artillerymen, tankers and  anti-tank units, showed excellent performance.

During intense fighting, the Artsakh Defense Forces destroyed 2  Azerbaijani helicopters attacking the positions of the Armenian side,  26 tanks, as well as 14 drones, 1 BM-21 (Grad) missile and artillery  installation, 4 BMP and 1 engineering installation.

During the fighting on the contact line, the Armenian side lost 64  military personnel, 13 volunteers, 4 civilians, more than 120 people  were injured, another 9 military personnel died after the cessation  of active military operations, from April 13, several died later in  hospitals.

Based on the data of the State Department, presented on May 16 in  Vienna in the same year, it becomes clear that in addition to 81  losses from the Armenian side, about 270 Azerbaijanis died. At the  same time, analysts at the Bellingcat international research group  estimate the losses of Baku at 400-500 killed soldiers.