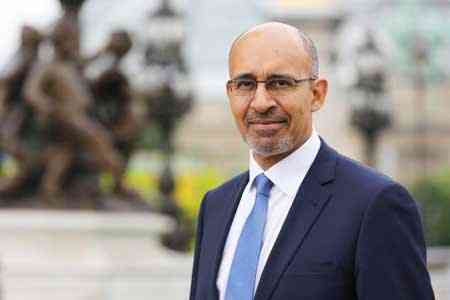 ArmInfo.OSCE Representative on Freedom of the Media, Harlem Desir, welcomed today the swift reaction of the Armenian Government in addressing his  concerns about the Decree on the State of Emergency, adopted on 23  March, in the context of the COVID-19 pandemic. This is stated in an  OSCE statement received by ArmInfo.

"I welcome the" Explanatory Memorandum on Measures Taken by the  Armenian Government, "which I received today from the Armenian  authorities, published after my March 24 statement regarding the  restriction of media freedom in the Republic of Armenia. I would like  to note that the Armenian government decided to amend in the "Decree  on the state of emergency regarding media regulations" in order to  take into account the concerns expressed by me, as well as NGOs  involved in protecting the interests of the media and editors of  Armenian media, as well as the general position of international  media dates for freedom of expression expressed in our joint  statement of March 19, "said Desir.

"I welcome the 'Explanatory Memorandum on measures taken by the  Government of Armenia in response to the Press Release of 24 March of  the Representative on Freedom of the Media' that I received today  from the authorities of Armenia," Desir said. "I note, in particular,  that the Government has decided to amend the Decree on the State of  Emergency concerning the regulations of media activity in order to  address my concerns, those of media advocacy NGOs and editors in  Armenia, as well as the common position of the international mandates  on freedom of expression expressed in our joint statement of 19  March."

The Representative added: "I want to underline that the Memorandum  stated that 'the Decree of the Government regulates only the  publication of information of a medical and epidemiological nature,  thus ensuring safeguards for the genuine freedom of media outside  this narrow topical framework.'" In his press statement of 24 March  (https://www.osce.org/representative-on-freedom-of-media/449098), the  Representative raised his concerns on the State of emergency  legislation and insisted that the ‘oronavirus response should not  impede the work of the media in Armenia. The decree would have  forbidden the media from publishing news on COVID-19 in Armenia from  sources other than those released by official government sources.

"I share the preoccupation of the Government of Armenia to combat the  dissemination of false information related to the health crisis," the  Representative said. "At the same time, I recall the importance of  ensuring the free flow of information, which is a key component for  providing the public with information on the vital measures needed to  contain the virus, as well as the respect for the right of the media  to report on the pandemic and governmental policies.  We will  continue to co-operate with the Armenian authorities in this endeavor  during this emergency situation and thereafter by developing good  practices and a strategy to combat 'fake news' and disinformation,"  concluded Desir.