A ban on intraregional passenger transportation will be introduced in  Armenia 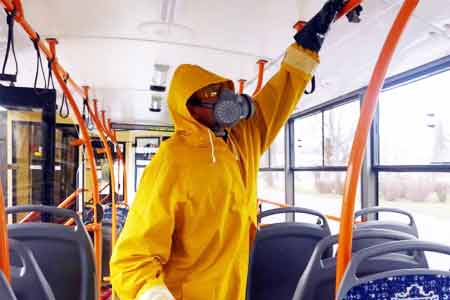 ArmInfo. As of March 8 this year passenger traffic in Armenia was registered at the loss of 6 thousand people, today this figure has dropped to 800 people (in  daily terms).  This was announced on March 27 during a press  conference in the Single Information Center of the Republic of  Armenia by the Deputy Minister of Territorial Administration and  Infrastructures of the Republic of Armenia  Arsen Simonyan.

In this regard, he noted that today 1 Belarusian company (<Belavia>)  and 4 Russian companies ("Aeroflot>," Sibir ", NordWind and Ural  Airlines) carry out air transportation in Armenia.

The downward trend was recorded in terms of road transport. According  to the deputy minister, even before the decision of the Commandant on  restricting freedom of movement and observing the regime of self-  isolation, a reduction in passenger traffic by 80% was recorded.  Moreover, according to him, intraregional transportation by buses and  minibuses is still operating in Armenia in Shirak, Lori, Syunik and  Kotayk, and intracommunal - in Gegharkunik, Tavush, Shirak, Lori,  Syunik and Kotayk. According to Simonyan, the vehicles are  disinfected daily, and before the start of the route, the temperature  is measured by the drivers.  At the same time, he stressed that today  it is planned to amend the decision of the Commandant - to prohibit  the intraregional transportation of passengers by buses and minibuses  as well.

Regarding railway transport, the deputy minister noted that the  trains operate in the same mode, except on Fridays, Saturdays and  Sundays. At the same time, according to him, SCR was given  instructions regarding compliance with social distance during the  transportation of passengers.

Recall that as of 10:00 on March 27 in Armenia 30 new cases of  infection with a new type of coronavirus were detected.

In total, 329 cases of coronavirus were confirmed in the republic, 18  people recovered, 1625 tests carried out gave a negative result.

The day before, the first patient with coronavirus died in Armenia:  he was 72 years old, he suffered from severe chronic diseases.