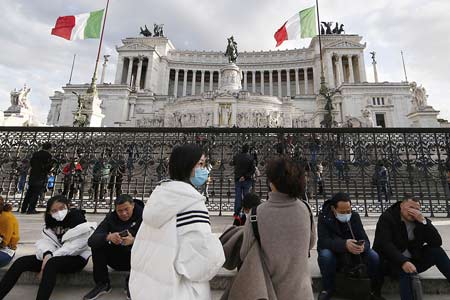 ArmInfo. The Armenian Embassy in Italy addressed to the citizens of Armenia who are currently on Italian territory.

The message of the Armenian diplomatic mission reads as follows:   "The Government of Armenia is taking measures to organize the return  of Armenian citizens from Italy to their homeland. We ask you to  provide the Embassy with copies of your passport, visa or residence  permit, as well as your contact details and purpose of the visit,  phone number, email address and address of residence in Italy in  order to maintain constant contact with the Embassy.

Yesterday, in Italy, emergency measures were introduced to prevent  the outbreak of coronavirus throughout the country, and therefore  quarantine measures apply throughout the republic.

Prime Minister of Italia Giuseppe Conte ordered the expansion of  quarantine measures, including the restriction of public gatherings  and sporting events, as well as the closure of schools throughout the  country. Previously, quarantine was valid only in the northern  regions. "The figures tell us that we have seen a significant  increase in the number of people in intensive care units and,  unfortunately, who have died. I am going to sign an order that can be  summarized by the expression" I will stay at home. "There will no  longer be a red zone, zone number 1 and 2, but all of Italy will  become a protected zone, "he said, adding that the new measures will  enter into force on the morning of March 10th.

Conte said that now throughout Italy should "avoid movement except in  confirmed circumstances of necessity, due to work or in connection  with health." "We are adding to this order a ban on people gathering  outdoors in working establishments," Conte said.

In accordance with the new measures, all bars and restaurants in  Italy should close at six in the evening.  Their work in the daytime  is possible only with respect to the distance between visitors.   Studying at schools and universities is terminated until April 3.   Pubs, discos, and gambling halls are closing. All ceremonies are  forbidden, including weddings, funerals and church services,  theaters, cinemas, museums and gyms do not work. However, Conte  stressed that the new measures will not entail any consequences for  the operation of public transport.  In Italy, more than 9 thousand  cases of infection with a new type of virus have been recorded, with  more than 500 already dead.