In 2023, the whole world will be able to see Noah`s Ark against the backdrop of Ararat 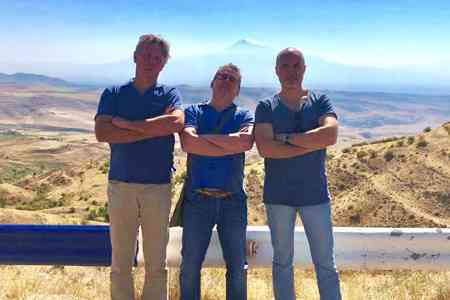 According to biblical history, Noah's Ark was built to save Noah's family, and all kinds of animals from the Flood, which occurred, resulted in by the moral decline of man. Only at the moment when the water began to decrease, life was reborn and people were able to live on the earth and multiply again.

Billions of believers around the world consider Noah’s story to be their own story. Following them, the humanity was granted another chance in this way.

But the philosophy of this chapter of the Old Testament has a symbolic connection with the history of Armenia. It carries the idea of destruction and survival, and also allows you to look at the future of the country and people from a different point of view.

Recently, Armenia regains itself and, returning to its roots, moves to a new level in the field of public life, education, culture, tourism, etc.

The Cultural and Educational Theme Park “Noah's Ark”, which is a key element of the “Global Project for Armenia”, will be open for mass visits already in 2023. This is not only a global anchor tourism project, but also a number of public initiatives.

We asked Igor Philonenko, one of the initiators of the project, to tell about this part of the Global Project for Armenia, when around the symbol of Noah's Ark understandable for all people, it is possible to unite existing and implement new public and interstate programs.

“The issue of preserving humanity, as well as the life on earth in general, is becoming increasingly relevant. From the middle of the twentieth century, the threat of a nuclear catastrophe resulted in by someone’s evil will and technological error is not ruled out by now. The threat of overpopulation of the planet has been reduced, both due to a slowdown in the overall growth of our “population” and due to scientific and technological progress, which gives us strong confidence in the ability to feed and give a high quality of life to the entire population of the planet in the coming 50 years. At the same time, rapidly developing technologies in the near future will put on the agenda the issue of interaction with artificial intelligence, production systems, infrastructure and borders created on its basis, beyond which we cannot control it. This is a question that will need to be answered by the next generation!

Even science fiction did not suggest that we would be able to approach this point of development so quickly. The environmental consequences of our business and life are growing. The globalization of the economy, the emergence of international institutions for establishing interaction between countries and peoples have not yet led to a decrease in tension. Armenia is a country with an outstanding and very complex past. Two-thirds of Armenians now live outside their historical homeland, but they are also ready to join (and are joining) in the discussion on the development of the country, in increasing its role in the international public and political space. The Armenian government has launched a number of initiatives to counter and prevent genocides. On behalf of all the Armenians who survived the Genocide and in gratitude to their saviors, the Aurora Humanitarian Initiative was created. But there are initiatives of the UN, youth non-governmental organizations, and a number of countries, for example, the Community of the Unified Fate of Humanity, put forward by China in 2012.

Armenia can become the initiator of a number of new initiatives across the entire spectrum of threats, and a convenient hospitable platform for discussing such initiatives. This is perhaps the only country that has equally good relations with Russia and the United States, with Europe and Iran ... This unique positioning must be used - it will be useful in an inevitable productive dialogue with today's complex neighbors.

”Let's return to the main topic of our article - Thematic Park of Noah's Ark, as an anchor tourism project of a global scale.

- And is it possible to set such a high threshold for our country? Indeed, this year less than 2 million tourists visited Armenia. Will we be able to maintain high world standards of service, and, which is most important, to attract new tourists that are so important for us? - we asked the head of the initiative group Andrei Korzhakov.

“Yes, last year tourists arrived in Armenia were over than four times less than in neighboring Georgia. But let's take a closer look to what preceded this:

Unprecedented measures to attract investment in the tourism industry at the end of the 2000s and five years of tourist flow growth of more than 20 percent annually. A decrease in the growth rate of tourists in Georgia occurred only last year amid well-known events. Nevertheless, even in the difficult 19th year, the growth of tourist flow remained at the level of 7 percent.

By the way, the Armenian Tourism Committee predicts an increase of the number of tourists in Armenia up to 7 million by 2030. This is a very neat and conservative forecast. The issue of quantity is important, but not the only one. How much money will the tourists leave in our country? How will be this flow distributed throughout the year? How and due to what to raise the average check of a tourist, but so that he was pleased with his spending and the trip as a whole. How to try to “drag” a significant part of spring, autumn, and, prospectively, winter, into the visited “high” season? We have some experience in creating such prerequisites within the framework of the existing infrastructure in Russia, France, and other countries, but there are more radical approaches, that are needed also.

For Armenia, we chose the theme park format, because it is understandable for the progressive European, American and Chinese tourists. For Americans, visiting theme parks is the most common type of family vacation - more than 450 million visits per year. If we add here American museums, which in many respects are similar to theme parks both in size and in the toolkit for involving visitors into the topic, we will generally get grandiose figures. People are ready to fly to the other side of the world for the sake of impressions, knowledge, good service.

We are sure of the success of our project, both from the point of view of the so-called entertaining, as well as civilization-based, enlightening tourism - we will have a correct, but entertaining exposition, stunning art objects and landscapes, world-level shows.

The construction of the Park itself, the beginning of its operation will spur and deploy many tourist communities in our direction. |From the five million tourists who we believe will visit Armenia as early as 2025, one and a half million are potential visitors to our Park. ”

What will the Noah's Ark Thematic Park be in essence?

It has a rather complex structure. It is planned to build the Ark itself strictly according to the rules of the Old Testament, with three floors of expositions with a total area of ​​10,000 sq m and a gallery equipped with modern technologies for visualization. The project will include Landscape Park, Noah's Vineyard, Apricot Grove, Eden, an open amphitheater for 2500 spectators and other museum, exhibition, congress and recreational open and closed (for year-round operation) venues. In addition, there will be service and office buildings, shops, restaurants, as well as plenty of space for walking. Thus, the total area occupied by the theme park will amount to 100 hectares, so this will be a pretty large project, including in comparison with the most famous historical and cultural objects of the world. Experts and scientists from both Armenia and other countries, charitable foundations, religious and public organizations will be involved in the implementation of all these tasks.

The Noah's Ark project will become a sustainable resource for the development of the country's economy. During the implementation of the project, more than 3 thousand jobs will be provided in various areas, as well as improved service and transport infrastructure, additional opportunities will be created for the development of small and medium-sized businesses, which will further contribute to the growth of state budget revenues. The number of staff in the operated park will comprise 250 - 300 employees.

As of this moment, active work is underway to find potential investors with the aim of financing this large-scale project, but the process cannot be further developed without approval by the government bodies that are at the stage of consideration of this issue.

Currently, several options for the location of the park are being worked out. The project budget is US $ 65 million, which will pay off (in the most conservative version and without including additional sources of income - catering, organization of events, etc.) for 7 years.

The initiators of the project are a team comprising Andrey Korzhakov (his background is  managing complex high-tech projects of the world's largest brands in Russia), economist, entrepreneur, visionary Igor Philonenko, entrepreneur from France Patrice Le Lann. Currently, the project team is expanding due to our compatriots and representatives of diaspora.

The project got the active support from the leadership of the Armenian Apostolic Church in Russia, among representatives of the Armenian diaspora, scientists and culture. We will certainly inform you, our dear readers, with further steps to develop this project and take a series of interviews from all of its active participants.