Pashinyan: Samvel Karapetyan`s work against the policy of the  destruction of Armenian monuments in Turkey and Azerbaijan is highly  appreciated 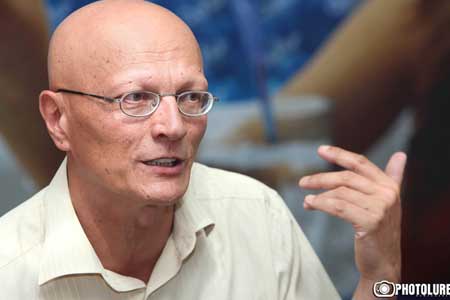 According to the press service of the government, the telegram in  particular reads:  ''I learned with deep sorrow about the untimely  death of the famous Armenian specialist in monuments, historian,  chairman of the Yerevan Office of the Research on Armenian  Architecture Foundation (RAA) Samvel Karapetyan. The consistent work  of the famous specialist in monuments against the policy of the  destruction of Armenian monuments in Turkey and Azerbaijan is worthy  of appreciation. I express my deepest condolences to the family and  colleagues of Samvel Karapetyan and share their grief''.  Famous  Armenian historian and specialist in architectural monuments Samvel  Karapetyan died at the age of 58. An expert traveled in Armenia,  Turkey, Georgia, and other countries, photographing and mapping  monuments of Armenian architecture for research purposes.

For many years, he fought against the attempts of the Georgian and  Turkish authorities to appropriate some Armenian historical monuments  by destroying the corresponding inscriptions in the Armenian  language.  In addition, thanks to the help of researchers and  tourists from around the world, he was able to collect and summarize  data on the destruction of Armenian monuments in Azerbaijan. In  particular, on the facts of the destruction by the Azerbaijani  military of the cemetery of Old Dzhugha, he created a documentary  film, which was subsequently marked with a presidential award. He  also presented these egregious facts in the US Congress and the  European Court of Human Rights. Samvel Karapetyan is the author of a  number of books and publications on the Armenian cultural and  architectural heritage.