Armenian President: Violence and atrocities against Armenians in  Sumgait, and then in Baku, Kirovabad and Maragh reminded the horrors  of the 1915 Armenian Genocide 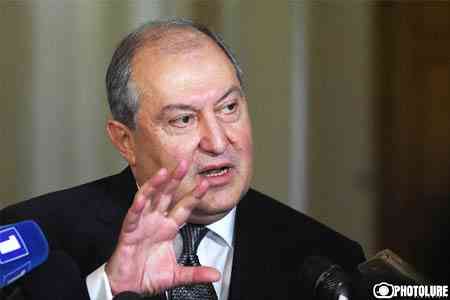 ArmInfo. Violence and atrocities against Armenians in Sumgait, and then in Baku, Kirovabad and Maraga, resembled the horrors of the 1915 Armenian Genocide.   This is stated in a statement by Armenian President Armen Sargsyan on  the occasion of the 32nd anniversary of the pogroms of Armenians in  Sumgait.

Recalling that today is the 32nd anniversary of the pogroms of  Armenians in Sumgait, the President of Armenia emphasized that in  February of 1988, with the criminal connivance of the Azerbaijani  authorities, local armed gangs began mass violence against the  Armenian population: genuine pogroms, accompanied by torture, rape,  robbery and arson.

"As a result of a crime organized and committed at the state level,  many Armenians were killed, many injured, subjected to violence and  forcibly displaced," the head of state said.

At the same time, he stated that these actions are the result of  xenophobia and especially Armenophobia, encouraged for decades in  Azerbaijan, and which today have deepened even further, having  received the character of a state systematic policy.

"Remembering the tragic events that took place more than 30 years  ago, and the memory of our compatriots who died, proclaiming February  28 in Armenia and Artsakh as the Day of Remembrance for the victims  of pogroms in the Azerbaijan SSR and protecting the rights of the  displaced Armenian population, we also send a message to humanity -  civilization cannot develop along the path of fascism, national  discrimination and xenophobia. Every unpunished case, every false  fact, every life interrupted by hate means the possibility of a new  tragedy, means support among xenophobia's instigators and its  propagandists, means a continuous wave of hatred in the region, an  unhindered path to ethnic cleansing, and more serious crimes against  humanity - genocide, "Sargsyan expressed his conviction.  At the same  time, the President of Armenia stated that the Sumgait tragedy and  the Armenians affected by it were direct victims of Armenianophobia  and xenophobia. "Leaving the path of the brown plague open today is a  sign of disrespect for the memory of all those who fell victim to  fascism and xenophobia. I respect the memory of our compatriots who  became victims of Azerbaijani violence in Sumgait and Baku," the  President of Armenia concluded.

Recall that ethnic unrest in the city of Sumgayit in the Azerbaijan  SSR occurred on February 27-29, 1988.  They were accompanied by  massive violence against the Armenian population, robberies,  killings, arson and destruction of property. According to the British  journalist Tom de Waal, these events were "the first outbreak of mass  violence in modern Soviet history." The Sumgait pogrom was a landmark  event and a turning point in the aggravation of the ethnic conflict  in Transcaucasia, which caused the first flows of Armenian refugees  from Sumgait to Stepanakert and Armenia. According to the official  data of the USSR Prosecutor General's Office, 26 citizens of Armenian  ethnicity were killed and more than a hundred people were injured in  the riots, while unofficial estimates say that the number of  Armenians killed is hundreds During the clean-up operation, 276  military personnel received injuries of varying severity .. On  February 29, 1988 at a meeting of the Politburo of the CPSU Central  Committee in Moscow, it was officially recognized that the massacres  and killings in Sumgait were carried out on a national basis,  however, as indicated in the materials of the human rights activist  Memorial Center, the lack of a timely investigation into the  circumstances of the pogroms, the establishment and punishment of  those responsible led to a further escalation of the Karabakh  conflict.