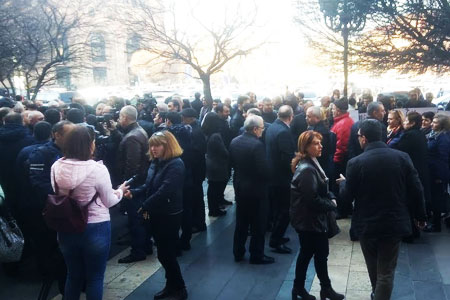 ArmInfo. In front of the government building, a rally of employees of the Republican AIDS  Prevention Center is taking place. The ArmInfo correspondent reports about this from the scene.

During the protest rally, employees noted that they disagree with the  decision of the Ministry of Health to merge the Center with the  Infectious Diseases Hospital in order to optimize. They called on the  minister to rethink his decision. The staff noted that this decision  was made in the light of the lack of specialized discussions with the  staff of the Center. This fact is of particular concern given the  fact that in the republic, in addition to the Center, there is no  other specialized organization working in the field of treatment and  prevention of AIDS.

The former head of the Center, Samvel Grigoryan, said in an interview  with reporters that the Center's employees are demanding that this  issue be discussed at a professional level. "The position of the  Ministry of Health should be justified. Something to close, open,  unite cannot be an end in itself. It is necessary to explain what  goals the ministry pursues, what the government will benefit from  this decision, the citizens of the country. Why the ministry does not  see the risks that may appear in connection with this virus in the  country. You cannot make decisions without leaving your office, this  is not serious, "Grigoryan emphasized.

He noted that the Center's employees did not intend to comply with  the illegal decisions of the Ministry of Health. "We do not oppose  individuals, including the personality of the new acting head of the  Center. But he came in order to unite our Center with the Infectious  Disease Hospital as soon as possible. We are against this decision,  and we do not intend to implement it. We we'll go to the end. If they  so want, then let them solve the issue by force, "Grigoryan  emphasized.

In turn, another employee of the Center noted: "We will try to convey  our voice to the Armenian government in all accessible and legal  ways. We cannot allow the established structure to collapse in the  country and nothing else is offered in return. And all the arguments  that are given to this decision are devoid of their meaning. "

Employees of the Center believe that there is a danger of losing  important, significant achievements of Armenia in this area. This, in  particular, concerns the prevention of mother-to-child transmission  of HIV, effective control of the epidemic and the quality of HIV  research.

It should be noted that yesterday the Minister of Health of Armenia  Arsen Torosyan dismissed the head of the Republican Center for AIDS  Prevention Samvel Grigoryan, who categorically disagreed with the  position of the minister on combining the Center with the Infectious  Disease Hospital in order to optimize.  In turn, the ministry  believes that scientific advances and modern international approaches  in the fight against AIDS indicate that this issue should be  integrated into the national health system. As was noted, the need  for separate institutions dealing with the problem of AIDS existed  about 40 years ago, when the acquired immunodeficiency syndrome was  only detected.

Meanwhile, according to official data of the same Ministry of Health,  from January to December 2019, the number of people infected with HIV  in Armenia increased by 2.10%. According to official data, in 2018,  429 cases were registered, and in 2019 - 438 cases, of which 135 are  women. However, in recent years, AIDS is not on the list of  registered infectious diseases, which is the direct result of the  work of the Center.  It turns out - the better you work, the more you  are not appreciated, "say the Center's employees.

Related articles
Armenian Minister of Healthcare dismissed head of Republican AIDS  Prevention Center who had disagreed with him
Wednesday, February 26 2020 18:40

ArmInfo. According to the Ministry of Healthcare, from January to December 2019, the number of people infected with HIV in Armenia increased by 2.10%.

The Ministry of Health clarified its position regarding the merger of  the Center for AIDS Prevention and the Nork hospital
Wednesday, February 12 2020 10:55

ArmInfo.The RA Ministry of Health clarified its position regarding the merger of the Republican AIDS Prevention Center and the Nork Infectious Diseases Clinical  Hospital.

ArmInfo. Employees of the Republican Center for AIDS Prevention oppose merging with the Nork Infectious Diseases Clinical Hospital. Recall that the corresponding  government decision was made on January 30.